The Irish conceptual artist and photographer Richard Mosse’s current installation at the San Francisco Museum of Modern Art, Richard Mosse: Incoming, is a beautifully installed artwork presented as a three-channel video installation at epic scale. Concerned with the present-day realities of mass migration and displacement, the images that unfold are harrowing and disturbing, not only in their subject matter, but in the visual process the artist utilizes to portray the unspeakable.  Accompanying the video installation is a selection of large panoramic photographs from the artist’s Castle series, comprised of digitally composited images of refugee camps, made along mass migration routes from the Middle East and Central Asia into Europe. These photographs, however, are but a prelude to the video installation, which is, without question, the exhibition’s main event.

To record his moving images, Mosse uses a military camera designed to detect thermal radiation and body heat over distances as great as 30 kilometers. The camera is designated as a weapon because its primary use is for long-range surveillance. Mosse's utilization of this technology shifts our visual understanding of the refugee crisis away from the ubiquitous mass media images of desperate migrants at sea, embattled rescue workers and the specter of tragic and senseless death to something otherworldly: ghostly white figures akin to those seen

in horror or science fiction films. They glow as if lit from within, creating an eerie effect in which moisture and sweat are rendered with disturbing clarity, while facial particularities are muddied and almost indiscernible.

In one uncomfortably voyeuristic scene, the camera lingers on a frontal view of a young Muslim man as he washes his face and then prays. Presented in slow motion, the water splashes on his face in copious white washes, as if he is dowsing himself with white paint. The imagery is, at times, beautifully serene: impressionistic clouds and kites fly across peaceful skies, while in other instances, they are disturbingly cruel in their clarity. This quality is particularly evident in the scenes of encampment, in which images of banality, boredom and barely repressed anger consume their inhabitants.  Children play, Muslim women in hijabs and headscarves gather and tend to the young, men of all ages engage in physical labor, boys fight. In other instances, aerial shots of encampments capture claustrophobic and decrepit conditions that are reminiscent of concentration camps.  Part of what makes the installation so jarring is the visceral score; it rumbles and shakes the entire exhibition space, disallowing complacent viewing as it shifts from ominous tones to African and house music. The imagery moves from tragic scenes of refugees being rescued from makeshifts boats to missiles being installed on fighter jets on an aircraft carrier, violent military bombings, and passages of pure visual abstraction that offer brief periods of respite.  In one disturbing scene, doctors conduct an autopsy on what appears to be the corpse of a child.  Each sequence is unpredictable, bewildering and relentlessly tense.

Incoming traces the journeys of migrants from the Middle East as they flee countries like Syria, Iraq and Afghanistan en route to the EU. The installation tracks the movements refugees from Senegal, Mali, Nigeria, Niger, Chad, Sudan, Ethiopia and Eritrea. Migrants from these nations attempt the perilous route through the Sahara Desert, eventually trying to cross the

Mediterranean in hopes of reaching Italy before moving on to other wealthy European countries like the UK, France and Germany.  Mosse draws attention to the harsh reality of the desert nations from which the majority of these refugees are fleeing: locations that have been profoundly impacted by climate change, rendering the land increasingly uninhabitable and its people susceptible to violent conflict.

From both a formal and political standpoint, the installation is very much in dialogue with works by artists Trevor Paglen, John Akomfrah, Shirin Neshat, Isaac Julien, Arthur Jafa and Steve McQueen.  Affectively, it is perhaps most reminiscent of McQueen’s celebrated film installation Western Deep.  Mosse is an adept formalist, with considerable command of his craft. As a result, Incoming feels like serious art, primarily because of its socially progressive engagement with the migratory condition, and specifically, the current global refugee crisis.  But there is a darker, more troubling dimension to this work, and I’m not referring to the on-screen tragedies meant to open our eyes. Rather, I’m alluding to the visual and ideological rhetoric of the piece: those messy undercurrents that subtend the aesthetic splendor and the political pretensions that lie on its surface.  From an artistic standpoint, the infrared camera is a beautiful gimmick: it 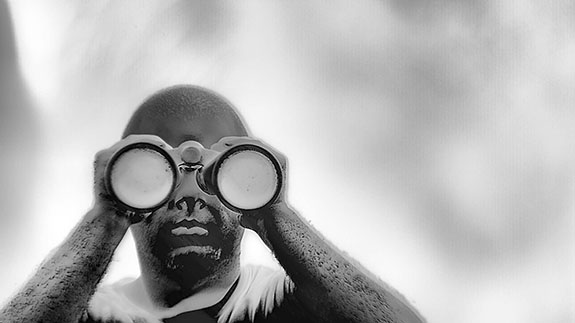 creates an instantly haunting image while seeming to exude gravitas. For Mosse, the effect of the camera allows him to poignantly capture what he calls a "perfect storm of human displacement," brought about by global warming: "ambivalence, subjectivity, perception, body heat, mortality, borders, insurgency, climate change, and war." Of course, one could argue that all this tech geekery is meant to render these bodies and the dystopian conditions they suffer easier to gaze upon. The figures are made monstrous—which is likely the point—but is this gesture one that will lead us to greater awareness and empathy? Or are we meant to simply find some semblance of beauty in the profane?

Incoming highlights the ease with which the Western art world has become comfortable with images of the suffering racialized body, which now function as shorthand for political consciousness and empathetic engagement.  Such displays of wokeness are de rigueur in the arts these days, and in many ways, Richard Mosse: Incoming feels like watching the greatest hits of global suffering.  The Slovenian philosopher Slavoj Žižek aptly named this tendency the “culturalization of politics”: the pseudo-political aestheticization of the other’s trauma. I say this without a hint of cynicism because this tendency towards a kind of trauma-porn in Western visual culture has become exhausting. Indeed, all this Lefty earnestness can lead us to more nuanced images, or at least attempt to turn away from this over-emphasis on the victims of global capitalism, while turning a blind eye to its Western perpetrators. But if we manage to turn 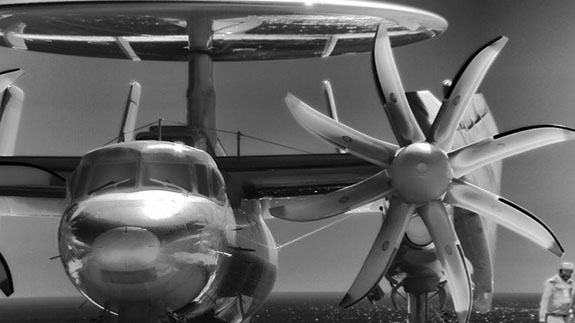 off our criticality and look beyond all the tragic brown bodies and whatnot, we can enjoy the sheer scale, rapturous sound and affective visual splendor of the installation.  It is formally impressive, and it held my attention throughout its duration, despite my misgivings.

The artworld’s critical response to this work suggests that Mosse has found a way to turn a military weapon into a tool for activism rather than war.  But I disagree. Incoming is meant to implicate us all in global human tragedy. But does it succeed in this aim? I would argue that it absolutely does not. The technology is still being utilized as a weapon that demeans its subjects, rendering them even less human and more distinctly unknowable than we could have previously imagined.  The infra-red distorts bodies, which comes off as a kind of puerile means to displace the messiness of race and subjectivity. The technology enables one to look, but not to see; it removes that which is most uncomfortable to gaze upon. These are human beings being surveilled, and their distorted image should not be the stuff of art world entertainment.  Intentionally or not, Incoming evokes one of the most pernicious Western tropes: that of the noble savage, whose pre-ideological innocence bears no relation to modern notions of civilization, and is, therefore, perceived as more connected to the earth. This idealizing of the uncivilized is meant to symbolize intrinsic goodness or innocence that is uncorrupted by Western influence. All of this is quite old, as there are shades of Manifest Destiny here: 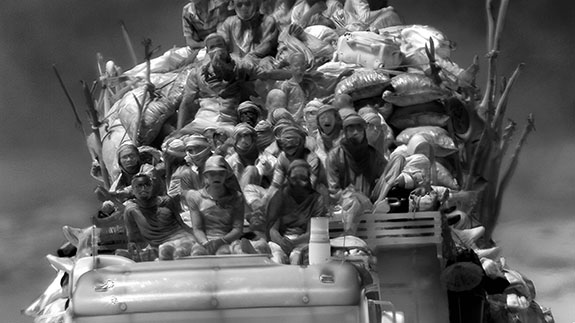 what amounts to the visual culture of empire. The technologies and image-making practices have become more sophisticated, but the ideas have not. There is a lot of hubris that compels one to watch people in such a sustained and panoptic manner, and utilizing a global surveillance technology imposes additional violence on those being surveilled. But the real question is:  how can one sustain such an obscene gaze while artistically wielding a technology that imposes control and dominion over the earth and its people?  This is a tool of Western expansion, repurposed as a medium for what is meant to be read as socially conscious art.

We must move beyond this gleeful aestheticizing of the racial other, this art world cliché par excellence. Mosse is undoubtedly aware of this problem, and perhaps his unique way of transforming suffering into spectacle is meant to make us aware of our complacency—and the ease and comfort with which we callously consume the aesthetics of suffering on the evening news. But what happens to all this injustice once the installation comes down? And who are these images for? Arguably, they are not for those who have made such perilous journeys on their path to citizenship in wealthy Western nations. These are questions that need answers, even as we continue to enjoy the visually resplendent pleasures of global catastrophe.

Derek Conrad Murray, PhD, is an interdisciplinary theorist specializing in the history, theory, and criticism of contemporary art and visual culture. Murray works in contemporary aesthetic and cultural theory with particular attention to technocultural engagements with identity and representation. He is currently Professor of History of Art and Visual Culture at the University of California, Santa Cruz. He is the author of Queering Post-Black Art: Artists Transforming African-American Identity After Civil Rights (2016) and the forthcoming book Mapplethorpe and the Flower: Radical Sexuality and the Limits of Control (2020).