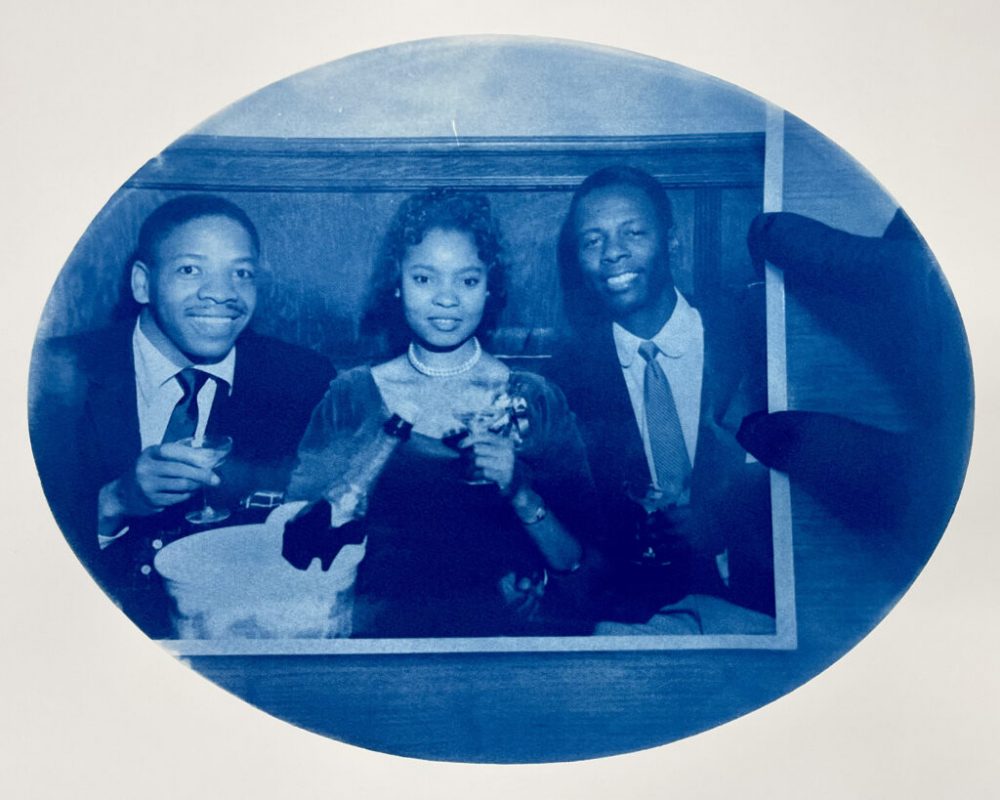 Willful and malignant ignorance about the nature of the Black experience runs through American history.  Photographer Jonathan Calm’s work posits a three-part relationship among, respectively, that unexamined history; photography’s role, both complicit with or (revelatory of) hidden oppression; and architecture as social restriction and control—whether in public housing, prisons, or public accommodations.  In his stirring exhibition at Rena Bransten, Hands on the Wheel: African American (Auto)mobility in Space, Time and Mind, photographer Jonathan Calm addresses one aspect of that under appreciated record: the 20th-century social structures and institutions that catered to African Americans while traveling or recreating.

For instance, Blue Black History (A Moment in the New China Club, NV) shows three good-looking young people enjoying an evening at a casino that sported a nightclub and served a primarily Black and Asian clientele in Reno from 1931 to 1985.  (Reno’s casinos were desegregated in 1965.)  Researching this article, I discovered another local black institution previously unknown to me: the Bay Area Golf Club, an establishment that was contemporaneous with the New China Club.  Calm also includes a suite of six cyanotypes that document such pivotal locales as Martin Luther King Jr.’s family home and the base in Tuskegee, where the Air Force trained its first Black pilots.  The title evokes jazz and blues titles (e.g., Louis Armstrong’s What Did I Do to Be so Black and Blue?) and actual bruises, physical and psychic.  The remainder of the exhibition includes black-and-white documentary images of hotels and guest houses that were part of the Negro Motorist Green Book (1936-66) guide for Black travelers and a series of large, elaborately staged color prints that theatrically reenact, through self-portraits, key moments in African-American history.

In the latter, Calm simultaneously evokes the drama of those moments and the banality of evil as seen in its material remnants.  Akin to the recently seen exhibition of Isaac Julien’s photographs at McEvoy Foundation that recreated scenes from the life of Frederick Douglass, Calm places himself in period costume and on an antique train car enacting Homer Plessy’s refusal to vacate a whites-only car in Louisiana in 1890.

That event triggered the case that led the Supreme Court to uphold the “separate but equal” clause of the Constitution that paved the way for the extension of Jim Crow laws.  Calm depicts Plessy not among an angry crowd but alone, perhaps in the instant before he was discovered.  His unsure eyes and furtive glance portend the history he is about to make.

In Double Vision (Remains of Vanport, OR ), one of a series of 40 x 50-inch prints, Calm examines the history of a small city built in Oregon during WWII to house war workers and their families, a large percentage of whom were Black.  Though some of the town’s institutions were integrated, many were not.  This shameful reality, now largely forgotten by official history, was wiped out of existence by a Biblical-scale flood shortly after the war.  Calm poetically summarizes the episode with a bucolic scene of silence: a lake under a startling blue sky and white cumulus clouds.  In the foreground stands a brick wall with a one-foot gap dividing it in half, a metaphor for a town and nation divided by racial bias.

In Double Image (Underground) from the same series, Calm emerges shirtless from a trap door in the floor of a decaying shack, his image blurred to convey his speedy action.  We infer from the fear on his face that he is an escaped slave whose Underground Railroad hiding place has been discovered, and he is fleeing for his life.  Underground, a rich concept in African-American thinking, refers to a metaphorical, desperate struggle to escape from the strictures and pain of a racist society, with ancillary references to Richard Wright’s book, The Man Who Lived Underground, and Thelonius Monk’s 1968 album, Underground.

Double Vision (Three Generations) — photographed in what appears to be a small lecture hall at Fisk University, one of the leading traditionally Black universities, founded in 1866 in Nashville, Tennessee – shows the same shirtless protagonist seen earlier.  He appears twice on stage, seated and standing, and in both cases transparent; a third, solid iteration,

that he photographed seated in the audience, shows us his back.  The figure on stage is enveloped in white smoke like an emerging ghost: the slave, the escapee, and his undergraduate descendant, or so we imagine.

The images of accommodations for Black travelers offer crisp, documentary-style illustrations of the range of lodging on offer, from large brick hotels, roadside motels and cottages to abandoned, overgrown guest houses.  The only common elements in these photos are gorgeous trees, serving as witnesses over the centuries. So generic are these twelve images that, without titles, it would be hard to know what they represent – proof that when sites of momentous events go unacknowledged, they become generic, obscuring the injustices and acts of courage that transpired (and inspired) these pictures.  Calm invites viewers to remember that history is never over, that it informs and coexists within the present.

Renny Pritikin was the chief curator at The Contemporary Jewish Museum in San Francisco from 2014 to 2018.  Before that, he was the director of the Richard Nelson Gallery at UC Davis and the founding chief curator at Yerba Buena Center for the Arts beginning in 1992.  For 11 years, he was also a senior adjunct professor at California College of the Arts, where he taught in the graduate program in Curatorial Practice.  Pritikin has given lecture tours in museums in Japan as a guest of the State Department, and in New Zealand as a Fulbright Scholar, and visited Israel as a Koret Israel Prize winner.  The Prelinger Library published his most recent book of poems, Westerns and Dramas, in 2020. He is the United States correspondent for Umbigo magazine in Lisbon, Portugal.