A flood, a riot, an earthquake, a pandemic – disaster strains the foundations of civilization to the breaking point, leaving individuals to react, as they see fit, to the chaos around them. Some cower in fear, shutting their eyes until the disaster passes. Others fight and use every force at their command to resist the onslaught. Some wisely band together in hopes of standing strong while others bravely put themselves in harm’s way to aid the fallen. All of these reactions are present in Bill Viola’s The Raft, on view through May 10 at the Crocker Art Museum.

Viola, a pioneering video artist who remains peerless in his field, has used water in one way or another in most of his major works. As a boy, he almost drowned in a lake, and he remembers the experience as otherworldly. Although he was presumably rescued, he has, in many ways, sought to return to that place, where the veil of the material world was pulled back ever so slightly to reveal something that lies beyond. In interviews, Viola talks about this as a kind of “truth” or “spiritual reality.” 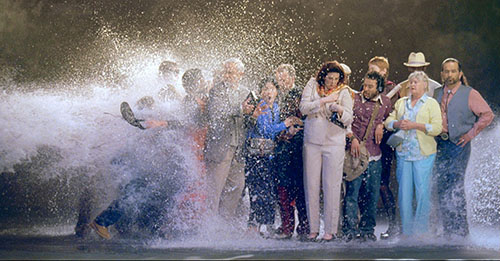 In The Raft, you experience water’s force at its most violent as well as the range of human responses triggered by calamity. The video is a 10-minute loop and, depending on when you enter the gallery’s dark, winding hall, your first sense of it will likely be the sound of whipping wind, raging water and a strange twanging, like the furious beating of cable lines against the mast of an old sailing ship. If by chance, you walk in at the beginning, you’ll be greeted by an eerie quiet. It’s followed by a view of 12 or so people standing together as if packed into a subway car or a large elevator. The video, shot on high-speed film, plays back in extreme slow motion, amplifying and exaggerating every movement and gesture. At first, everyone is painfully polite and withdrawn, hardly making eye contact or interacting. The slow-motion magnifies the sense of unease as tiny, insignificant gestures of loneliness and alienation unfold over minutes of playback time. More “passengers” arrive in short intervals, weaving themselves into the ever-tightening fabric of the small crowd. The last person to enter is a young woman. She deftly threads through several taller people and finds another woman in the middle of the group who appears to know her. As they exchange the first unalienated gestures of the piece, a powerful flood of water streams in from each side of the frame, instantly bowling over several people and throwing the group into chaos. 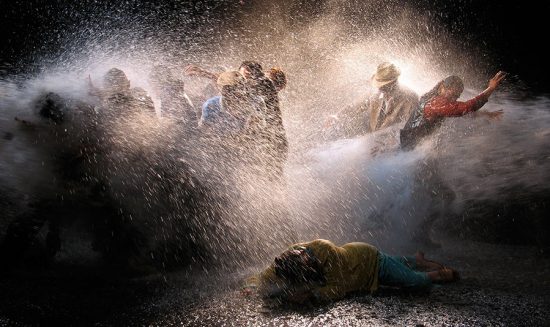 For about five minutes, torrents of water rip through this sundry crew. A dozen micro-dramas unfold: an elderly woman falls; two women, strangers, cling together and appear to weep; a man is knocked to his knees; a tall woman in a white suit is batted about, the bright red of her scarf whipping everywhere as she tries to find footing; a man struggles to stand for several minutes but finally collapses. As quickly as it rose up, the flood recedes, and the violent whipping of the wind dies down to a low hum. The utterly exhausted group begins to take stock and react to the destruction around them. The older woman in yellow is sprawled, face down in the center of the chaos. Some rush to render aid. Before the video fades to black, she gives the barest sign of movement. Everyone has survived.

The Raft was commissioned for the 2004 Olympics in Athens and is clearly modeled on The Raft of the Medusa (1818) by Theodore Gericault. It closely aligns in theme and execution with work Viola has been making since The Greeting (1995), a slow-motion video installation based on Pontormo’s Visitation (1528). His later work, Emergence (2002), does the same with Masolino’s Pieta (1424). Each time, Viola updates the clothing and presentation to give his work a contemporary and, therefore, timeless feel. The flickering light of a projector and the extreme slow motion give the installations an in-between feel: between painting and video, life and death, dream and reality — a glimpse of the world Viola saw as a small boy drowning. 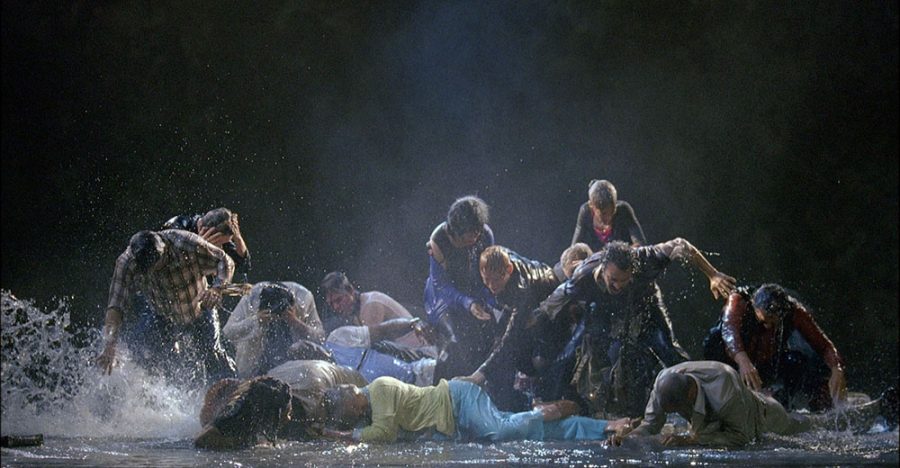 While Viola borrows liberally from painting’s history, his work of the late 1990s and early 2000s fits into the allegorical and theatrical approaches of fellow moving-image artists Mathew Barney and William Kentridge, but without Barney’s labored symbolism nor Kentridge’s whimsy. Instead, Viola refines his themes and presentation down to an elemental level, presenting clear, instantly evocative collisions of human universals. As the basic element of water collides with the diverse-but-unified mass of humanity in The Raft, you feel the helplessness of disaster but, also, the hope and community that can emerge in its wake.

About the author:
Mikko Lautamo is an artist and educator from Sacramento. His work uses computer code to create interactive and never-repeating installations centering on blended biological, social, and economic systems. He teaches Electronic Art at Sac State and has exhibited work in the United States, Europe, Australia and online. His work can be viewed on Vimeo.