Whether beautifying 55-gallon drums of toxic chemicals, creating kinky sci-fi spectacles out of skimpily clad rodeo queens or using the androgynous attire of the Napoleonic era to concretize the notion of “intersex,” Deborah Oropallo consistently demonstrates a knack for driving pipelines into our subconscious.  By seamlessly blending digital, analog and mechanical painting techniques, she creates a level of hyperreality that seems perfectly calibrated to the unreality of the times.  Her recent video collaborations with the composer Andy Rappaport have added a new and exciting dimension to an already overflowing catalog of visual innovations.

Flight, a nine-channel video (co-created with Rappaport) that forms the thematic backbone of an exhibition of the same title, follows suit.  But instead of probing the nether realms of gender identity as she has in the past, Oropallo tackles mass migration, rendering the most urgent humanitarian crisis of the 21st century as a series of multi-layered still images that fade in and out of view on gold-framed monitors.  It’s a slow-motion palimpsest that builds to a searing, color-saturated climax.  In it, we 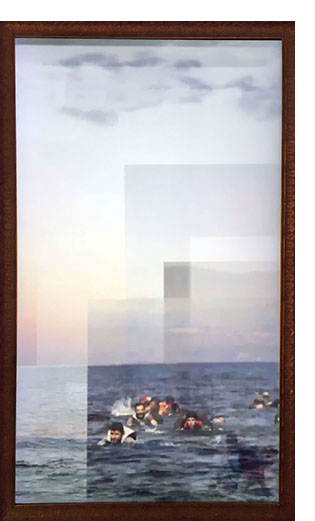 see people fleeing calamities of every sort, from political violence to the climate-induced environmental disasters that have made exodus their only option.  In contrast to much in the artist’s oeuvre in which daring visual conceits played starring roles, Flight ranks among Oropallo’s subtlest efforts, in that it doesn’t immediately grab you by the throat.  It unfolds slowly, and without much dramatic fanfare.  At least to start.

About 30 seconds in, however, distant horizon lines and gauzy ocean atmospherics give way to scenes of struggle, as all manner of unseaworthy vessels, packed to the gunwales with refugees, begin to populate the lower screens.  Some are clearly adrift.  Others make land, disgorging weary passengers into thigh-deep surf, their bodies swathed in orange lifejackets.  Other boats or rafts appear to have emptied their human cargo while still at sea: hapless victims can be seen flailing, begging for help.  In one particularly wrenching segment, you can make out the shadow of an outstretched arm (amidst floating bodies) being pulled below the surface.  This apparent drowning, captured on-camera, begs the question that haunts all such reportage: why didn’t the film crew try to rescue the victims?  Since open seas, generally speaking, aren’t not war zones, it’s likely that whoever recorded these scenes did so without having to dodge bullets.  And so, out of that moral quagmire, Oropallo, a master of online sleuthing, downloaded the footage she needed for Flight from news sources operating in Syria, Cuba, Sub-Saharan Africa, Myanmar, Somalia, Libya and other far-flung trouble spots.

Even so, Flight is not disaster porn, i.e., well-meaning art that does more harm than good by aestheticizing anonymous human misery for the entertainment of museum-goers. (For a prime example of that, look to Richard Mosse’s monumentally scaled video, Incoming, on view at SFMOMA through Feb.17.  Using weapons-grade video surveillance gear, Mosse turned refugees into eyeless, deracinated space aliens and set their plight to an earsplitting industrial soundtrack.)  In contrast, Oropallo, whose technical skills are every bit as prodigious as Mosse’s, takes a decidedly more humanistic approach; she cites Gericault’s The Raft of the Medusa (1818-19), Delacroix’s After the Shipwreck (1847) and Winslow Homer’s The Lifeline (1884) as aesthetic precedents for the stunning transformations she enacts on her 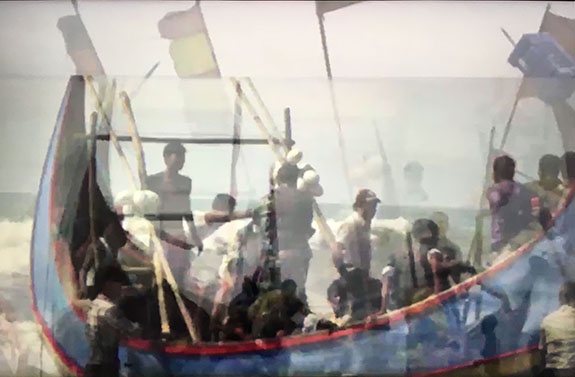 source material.  The images that flash across on each screen are built up in layers of varying opacity. They dissolve into each other with seams showing, much like photomontages on paper line that form the remainder of the exhibition.  Of these, all but two appeared in a 2018 exhibition, Dark Landscapes for a White House, which Maria Porges reviewed in these pages. So I’ll refrain from saying more except to note that they form a pitch-perfect thematic backdrop to the video, detailing, as they do, the effects of fires, floods and oil spills and other events invisibly referenced by the video.  What’s striking is how differently the montage technique plays when applied to moving pictures.  Where the static paper works, with their harsh juxtapositions, command immediate attention, the video images – though they depict equivalent horrors – sneak up on you. With their shifting levels of opacity and vaporous watercolor-like tones, they lend the overcrowded boat scenes a level of gravitas that wouldn’t be nearly as affecting had they been shown unaltered.  In the aggregate, they become what Oropallo intended them to be: a multi-faceted history painting.  But she doesn’t stop there.  She fixates on a dominant color – the orange/red of the lifejackets – and pushes it to extremes, first in recognizable abstractions and then in horizontally striped color fields that can only be interpreted one way: as blood.  Throughout, Rappaport’s slectronic score lends the proceedings a dirge-like, metronomic quality: that of a low-key death march.

In a written statement, Oropallo likened her approach to “visual journalism,” a designation that initially had me puzzled since journalism, as it’s commonly understood, means presenting multiple viewpoints.  However, it’s also true that not every story has more than one side, and so it is with the interrelated events depicted (and alluded to) in Flight.