Doug Aitken, a 51-year-old LA-based artist, presents splashy, big-budget, multi-screen videos designed to dazzle biennial crowds and address significant issues, one of them being the destabilizing effect of technological change.  If there's irony embedded in the artist's use of cutting-edge filmmaking techniques to call attention to what technology has wrought, Aitken seems to glide right past it, as if to say, "How else?"

He created, with corporate sponsorship, a custom-built passenger train (Station to Station, 2013) filled with A-list artists and performers who staged "happenings" from coast to coast; launched a barge-based performance worthy of James Bond off the Greek island of Hydros called Black Mirror (2011); installed and filmed wild animals (lion, bison, birds and a horse) cavorting in a cheap motel room in migration (empire), 2008; and moored, in the waters off Catalina Island, a video (Underwater Pavilions, 2016) accessible only to snorkelers and divers. In so doing, Aitken satisfies a craving among certain sectors of the art world for spectacle while

bathing audiences in the glow of nonlinear narratives that reflect the zeitgeist as seen from towers of High Capitalism.  In New Era (2018), a three-channel video installation at the Manetti Shrem Museum through next June, Aitken makes palpable the inner workings of a technological breakthrough that helped usher in the era we know today as Big Data.

Contrary to what you might expect or desire, New Era (2018) is not an explicit critique of that phenomenon – or any of the inventions leading up to it.  It is, at root, a modernist homage, akin in spirit to the wide-eyed wonder expressed toward industry in the early part of the last century by such artists as Berenice Abbott, Imogen Cunningham, Margaret Bourke-White, Edward Steichen and others who glorified the factories, bridges and buildings that were then sprouting from the American cityscape.  Though Aitken's photographic methods differ sharply from theirs, his venerative stance is roughly the same.  In New Era, the subject under consideration is the 1973 invention of the cellphone by Martin Cooper and his team at Motorola.  It was one milestone among many that brought us to our present condition, but it is significant in that today, we can fit into hip pockets a palm-sized device that in its original brick-like incarnation weighed 2.5 pounds, and that has since, reshaped communication, commerce and politics.

New Era begins, appropriately, with footage of an earlier example of human-engineered connectivity: the superhighway.  These aerial images shot at night, depict automobile traffic as pinpoints of light traversing lonely rural stretches and urban cloverleaves.  They unfold in golden hues worthy of a high-fashion magazine spread, yielding elegant abstractions divorced from the ground-level reality of traffic congestion, pollution and road rage.  Soon after, we see close-ups of Cooper repeating the words, "I made a phone call," followed by a thunderous explosion of electronically enhanced tribal drumbeats created by the minimalist composer Terry Riley.  Fast-paced visuals, built around the phone's keypad and its underlying circuitry, follow.  They shatter and recombine in gorgeous, kaleidoscopic patterns that suggest the

labyrinthine journeys taken by digital impulses as they ricochet through microelectronic mazes across the globe.  Aitken depicts the latter in a succession of satellite views: of deserts, cloud-streaked skies, snowy peaks, mountain ranges and icy landscapes on which we see relay towers and satellite dishes: the machines that enable electronic signals to bounce from to sky to Earth to human ears.

If Aitken intended to induce a kind of National Geographic-style awe, he succeeded.  Each channel of New Era's three projections is replicated on mirror-covered walls on which you see not only reflections of the source images but also reflections of yourself watching them.  In prior installations, most notably Black Mirror, Aitken filled entire rooms with mirrors, producing a mind-bending (and very different) effect known as infinite regress, whereby images appear to endlessly replicate.  Here, the variant of that idea falls flat, as it fails to meaningfully insinuate viewers into the action.  All of this could quickly become soporific had the artist not employed Cooper (in voiceovers) explaining his thoughts and misgivings about the cellphone.

Toward the middle of the 11-minute video, he declaims, in a sonorous voice, "If you think about yourself becoming one with a machine, you become one with another person and a machine, and pretty soon you have trouble finding the individual.  And you can have everybody in the universe being one with everyone else.  Just one entity.  An all-powerful entity that can do everything.  And if that happens, we are going to become God."

The final scene of New Era shows Cooper standing on a beach facing the horizon, saying: "I used to run on the beach and dive into the ocean, but I don't do that anymore.  You start recognizing your limitations at some point.  And it's not gonna stop." 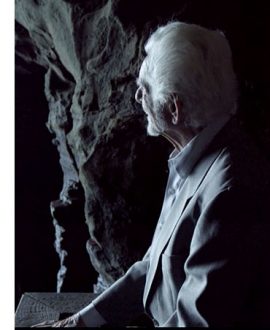 technology’s ability to outwit its inventors is unclear.  Either way, they seem to cast a pall over the utopian dreams that once drove men like himself.  But, as I looked at the waves lapping at Cooper's feet and the horizon stretching out at the edge of the frame, I wondered: could he have meant something else?  That technological progress ought to be closely monitored and, if need be, battled like a malignant growth?  This, too, is unclear.  But whatever Cooper and Aitken meant, the message ringing loud and clear from New Era is that we are perilously unequipped to decode, much less resist, the blandishments Silicon Valley dangles before us.