American conceptual artist Tracey Snelling’s latest exhibition entitled Clusterf*ck 9 is an eclectic and chaotic site-specific installation that considers, among other timely obsessions, the obscenities of consumer capitalism.  In her accompanying artist statement, Snelling sites scholar Michael Adams’s 2016 book In Praise of Profanity, a treatise that explores the linguistic, psychological and social role of profanity in a society that has made it an enduring taboo. Snelling’s appropriation of the term “clusterfuck” is in part motivated by Adams’s exploration and ultimate demystifying of the word’s etymology and varied interpretations, most of which define it as a type of snafu.  However, it is arguably the term’s interpretive nebulousness, as opposed to any singular meaning, that Snelling finds most generative because the exhibition itself defies concrete definitions or attempts to fully pin it down. That is perhaps its strength: its ability to effortlessly vacillate between legibility and unintelligibility, as it plays with meaning and meaninglessness. The exhibition reads like a very intentionally realized mobilization of the obscene as political and economic critique.

The installation consists of densely collaged walls of assorted media clippings, video projections, and hyper-detailed miniature sculptures of interior spaces and domestic bedrooms. These intimate sculptures nicely complement the wall collages, as they allude to more generalized notions of home, even as they seem to grant access into the interiority of an imaginary inhabitant.  At key moments in the wall installation, textual elements in neon appear 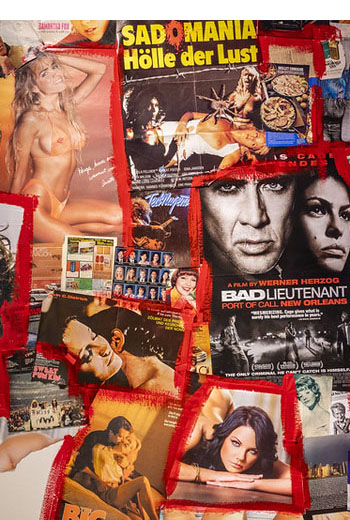 in seemingly intentional locations. The words She-Devil, Drift and Lost City, are placed on top of movie and rock band posters, Mad magazine covers and pornography, casting their luminescent glow—creating moments of kitschy beauty among the torrent of consumerist banality.  On the floors and tables rest other eclectic objects: vintage TVs, books like Earl Mindell’s Vitamin Bible, children’s toys, cans of Southgate beef stew, candles, and family photos, among other random elements.  In its seemingly intentional arbitrariness, the installation conjures an array of associations, one of the most evocative being a teenager’s bedroom, replete with posters, magazine clippings, pornographic images, t-shirts, album covers and other ephemera.  Many of these very American pop culture relics are in German, like a poster of the acclaimed 1973 Al Pacino film Serpico, or the 1984 British biographical film The Killing Fields.  In other instances, nude pinups are interspersed with more politically pointed references like a black t-shirt with a screen-printed image of a shirtless Vladimir Putin riding a bear through a creek.

The deluge of associations and juxtapositions are frenzied to the point of information overload, which is likely the point because as a conglomeration of references, they form into a concrete indictment of mass media rapacity, psychotic consumerism and political demagoguery in the 21st century.  In the center of the main room is a makeshift domestic living room, with a sofa, coffee and end tables, a lamp and a side chair. The seating arrangement faces a set of video projections, which are likely the most overtly legible, if not didactic elements in the installation. In one split-screen projection, juxtaposed clips of political speeches given by Barack and Michelle Obama are contrasted with those of President Donald Trump and First Lady Melania Trump.  These brief yet inflammatory clips recount the Trumps’ very public and intentional efforts to ridicule the Obamas by mimicking some of the most impactful moments from their oratorical successes.  Other video montages excerpt segments of gun-related content: classic cartoons imaging gun violence, actor Charlton Heston’s famous 2000 NRA speech where he uttered the words “cold dead hands,” gun industry promo videos showing scantily clad women firing assault rifles, Clint Eastwood as Dirty Harry, his cinematic alter-ego, set against notorious 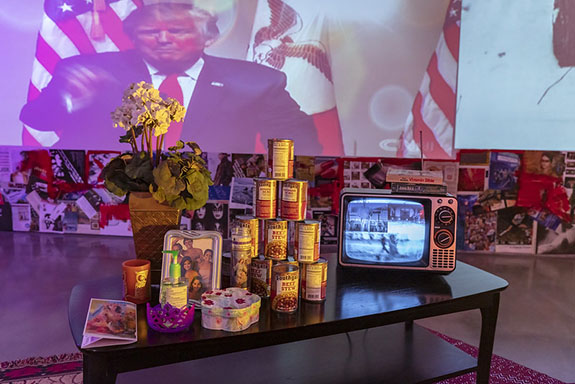 media footage of unarmed black American men who have been gunned down by the police. On the back wall of the gallery is another projection of self-help and personal empowerment promotional videos, which allude in un-subtle clarity to the commoditized and predatory nature of the personal improvement economy.

In all of its whimsical crudity, Clusterf*ck 9 is a provocative, albeit satirical take on everything that is horribly wrong with the current zeitgeist.  The exhibition has a snarky wit that is reminiscent of Snelling’s contemporaries Arthur Jafa, Marco Brambilla, Ryan Trecartin and Kalup Linzy, each of whom engages cynically with the most troubling aspects of mass media and consumerist culture.  In some respects, there is a distinct sense of nostalgia that emanates from the memorabilia on the installation walls.  It’s as if Snelling is remembering past moments, real or imagined—or constructing entirely fantastical ones. Its success lies in its formal decadence: the textures, the colors and abundant references and symbols that conjure strong personal associations.  The least convincing moments are the video projections that tend to 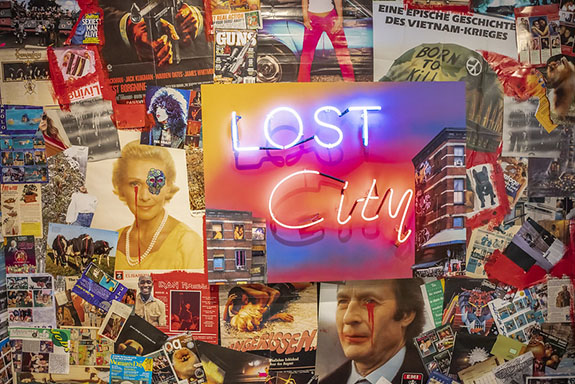 disrupt the installation’s overall semiotic porousness, which is really its strength. These flashes of didacticism convey a very predictable and politically liberal set of perspectives that tend to overshadow the show’s more unpredictable elements.  In some instances, I couldn’t discern if Snelling was indulging these Lefty positions or intentionally mocking them, but nevertheless, Clusterf*ck 9 is an evocative and formally rich exhibition that lingers in the mind, long after leaving the white cube.

Derek Conrad Murray is an interdisciplinary theorist specializing in the history, theory, and criticism of contemporary art and visual culture. Murray works in contemporary aesthetic and cultural theory with a particular attention to technocultural engagements with identity and representation. He is currently a professor in the History of Art and Visual Culture Department at the University of California, Santa Cruz. He is the author of Queering Post-Black Art: Artists Transforming African-American Identity After Civil Rights (2016) and the forthcoming book Mapplethorpe and the Flower: Radical Sexuality and the Limits of Control (2019).