Faces Without Noses: The Visual Laboratory of M. Louise Stanley, at the Richmond Art Center (RAC), documents the diary-cum-sketchbooks that describe the artist’s lifelong love affair with select members of the Western European canon of painters.  The sketchbooks are legendary among the fortunate few with whom she has shared them over the decades.  Now, the public can get a taste of these rarely seen books, made by an artist whose work has gone underappreciated and undervalued for too long.  The sketchbooks encompass many volumes and are extravagantly luscious—full of visual morsels devoured during her frequent trips to European museums.  Amy Spencer, the new and talented curator at the RAC, has put together a terrific small exhibition of them, along with several works on paper that extend the ideas in the sketchbooks.

Stanley buys them from a small shop in Florence; the selection is critical because of how important it is to have just the right sort of paper, heft and size.  Such books, bound in leather with marbelized paper covers, are beyond her means, but over the years she has negotiated a discount in exchange for drawings.  Speaking of affordability and access, Stanley says that her

obsessive sketching from the old masters is “a way to have what you can’t have.” It is also a form of kinetic self–pedagogy, making her “arms go through the same motions the artist did.”

These studies, however, go well beyond mere copying or fandom; they are highly skilled and frequently wildly satiric.  Their exaggerated, cartoonish features often lampoon the ostensible subjects, oftentimes from a decidedly feminist perspective. That practice, in the early 1970s, placed her at the forefront of a small, but potent movement called Bad Painting, so named because the artists involved displayed open disregard for the niceties of conventional figurative painting, not any technical shortcomings.  And although Stanley’s work did not appear in the groundbreaking exhibition of the same name curated by Marcia Tucker at the New Museum of Contemporary Art, it should have.

The sketchbooks, open to select pages beneath plexiglass vitrines, contain: watercolors of sunlit cottages and houses, surrounded by lush foliage; art observed in museums; animal studies; exquisite black-and-white ink drawings of cityscapes; ideas for future paintings; small ceramic vases in the Greco-Roman style (and drawings of them); notes to herself; portraits of people in museums; photos of interiors (and objects relevant to her paintings and drawings); and notes to herself about pen nibs.

This last item is interesting, as pens are the artist’s other extravagance.  They must meet her stringent specifications, one of which is that they have gold tips for flexibility.  To test a pen, she writes her name and the word Egypt, which, together, run any potential writing implement through its most difficult paces.

Because Stanley is a humorist and skeptic whose content frequently includes Christian imagery her art occasionally runs afoul of believers who are disconcerted by her apparent mistreatment of ostensibly serious subject matter.  Stanley, as it happens, long ago earned serious bona fides for delving into religious material.  All of her grandparents were missionaries, and as a child and an art student, she spent years studying the Guttenberg Bible at the Huntington Museum near to where she grew up; she and her family looked forward to the day each year that the museum opened the book to a new page.   She also studied the illuminated Book of Hours at UC Berkeley where, as a student there, she finagled a job that enabled her be alone with it almost every day.

The show also includes five framed paintings of her illuminated sketchbook pages. These detail wildly secular themes.  When a woman on a tour of European museums that Stanley organized

objected to the Christian suffering depicted, Stanley instructed: “just look between the knees and ankles,” suggesting that the perfection demonstrated in the mere depiction of the anatomy and clothing of the shins was a sufficient education in itself.

I mentioned earlier that the artist is in large part a satirist; she is one of the very few artists whose work has made me laugh out loud in a gallery or museum. This show, for example, has a painting on paper, and a picket line placard Stanley made for the second Women’s Day March, of essentially the same content, titled Bad Bankers. Both depict a line of chagrined businessmen awaiting ritual spanking by Justice, her blindfold askew.  Nearby is a small painting — a depiction from the knees down—of Christ’s feet nailed to the cross.  In the foreground are the ankles of a tourist, with bleeding sores on the back of her feet, bandaged from walking around all day in ill-fitting sandals. There is also a funny kind of triptych — a 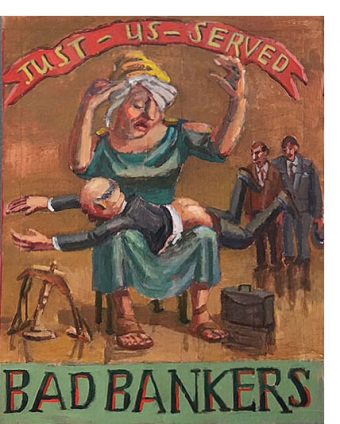 sketchbook and two paintings — showing three versions of the same concept: the artist’s alter-ego (a red-headed, ski-nosed, younger Louise, who appears frequently in her work) sitting at a computer wasting time while the muses impatiently await her return to a blank canvas seen peeking around the corner.

The title Faces Without Noses refers to the artist’s practice of rummaging through the vaults of art history for images to reclaim.  Stanley’s sketchbooks are, as Spencer describes them, such an “obsession and compulsion” that at this point in her career, they greatly outnumber her stand-alone works of art.  They help her do what she loves best, which is to imagine interior spaces, the play of shadow and light, and the ways Greco-Roman myths can be reimagined to stand in for friends, family and contemporary politics. “My religion is my art,” she has said. “I guess I’m still a missionary in a way.”

The RAC has long been a valued resource in the Bay Area, but is rarely acknowledged for the contributions its curators and artists have made in the 75 years of its existence.  Amy Spencer has organized an ambitious exhibition in the RAC’s larger gallery, titled Here is the Sea, a group exhibition that has several strong contributions, and one masterpiece: a near life-sized (14 x 51-foot) sperm whale mounted on the gallery wall by Jos Sances.  Like Stanley, he is a life-long Bay Area artist who has achieved little recognition given his enormous contribution to California art history as part of the La Raza movement and co-founder of Mission Grafica. The Smithsonian purchased 490 of his prints; yet he is not well known in local art circles.  His whale, composed of dozens of drawings scratched onto panels painted black, depicts political conflicts over the past 150 years, and is one of the most important and moving works done by a local artist in this century.

It, along with the work of Louise Stanley, ranks among the rarest of finds: great art that is also socially and politically engaged.

Renny Pritikin retired in December 2018 after almost five years as the chief curator at The Contemporary Jewish Museum in San Francisco. Prior to that he was the director of the Richard Nelson Gallery at UC Davis. In 2006 Pritikin and Matthias Geiger co-curated Joint Venture, Contemporary and Vintage Photography, The Ramer Collection and Other Selected Work, simultaneously at The Nelson Gallery at UC Davis and the Pence Gallery in Davis.  He was the founding chief curator at Yerba Buena Center for the Arts beginning in 1992. For 11 years he was also a senior adjunct professor at California College of the Arts, where he taught in the graduate program in Curatorial Practice. Pritikin has given lecture tours in museums in Japan as a guest of the State Department, and in New Zealand as a Fulbright Scholar, and visited Israel as a Koret Israel Prize winner. He is working on a memoir of his experiences in the arts from 1979 to 2018.