In an avalanche of pink, Portia Munson indoctrinates visitors into the world of Being a Girl: specifically, how the tyranny of a single color – pink – once defined (and may still define in some quarters) what it means to be female.  In a terrifyingly crammed space, thousands of doodads and tchotchkes, toys, sex toys, shoes and garments, fill what appears to be a bedroom almost to the ceiling with pinkness.  Above it all, a canopy of pink girl’s clothing, tied and sewn together, hangs like a colony of bats in a cave.  This is the Pink Project, and for 24 years, Munson has been collecting this stuff from thrift stores or recycling bins, all of it intended by manufacturers to appeal to women and girls.  Versions of this presentation have been circulating since it debuted in Bad Girls, a highly controversial 1994 show of feminist art curated by Marcia Tucker at the New Museum in New York.

The irony is that pink only became the official color of femininity in the mid-20th century.  Earlier, it was thought of as a boy’s color— the lighter version of war-like, domineering red.  For girls, pale blue, a lighter version of Virgin Mary’s cerulean, was deemed to be more appropriate.  A short reprieve from these pink-and-blue rules during the first wave of ‘70’s feminism was followed in the mid-‘80s (not

coincidentally, when prenatal testing became widespread, allowing certainty about a future child’s gender) with an avalanche of gender-specific goods.  It’s difficult to look at Munson’s presentation of it without feeling a twinge of guilt for having been complicit in exactly the sorts of gender-bound attitudes and consumerist behaviors being criticized.

On a nearby wall, several immense digital prints present more of the artist’s collection of pink junk, but these unfortunately feel a bit like filler. The pictures do not hold up well to close examination, despite the fact that they seem to invite intimacy. Still, they serve a purpose, in that they catalog the extent to which making something pink will (supposedly) get women to buy it—whether it is a hairbrush or a power drill. Though not pleasant, it is instructive to be reminded of the extent to which gender still determines a kind of second-class, “lesser-than” status. The 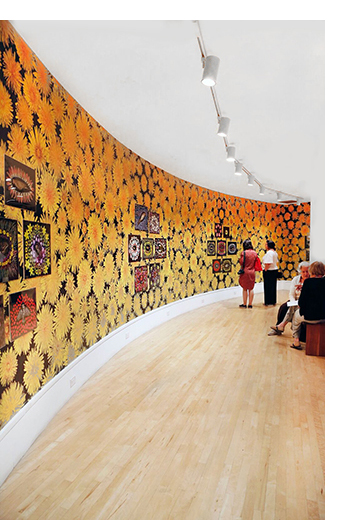 longevity of this project reveals the failures of that same '70s wave of feminism—failures of which women artists are reminded daily, in the continuing inequities of an art world dominated by white men.

Over the years, the context for this work, and for Munson’s project as a whole, has expanded. What began as a transgressive act, a rebellion against claustrophobic ideas of femininity, has since morphed into a broader reflection on the consequences our culture’s relentless cycle of consumption and waste.  Today, Munson has expanded her purview while employing many of the same visual strategies that initially brought her to public attention.  For Her Garden (2018), Munson applied a photographic “wallpaper” of brilliant yellow dandelions on a black ground to the curved side wall of the gallery. It serves as a setting for groupings of what are essentially funeral portraits: photographs of dead birds surrounded by meticulous arrangements of flower petals, seeds and leaves.  Munson, who lives in Catskill, New York, finds these roadside fatalities and places each on a flatbed scanner, surrounding the bodies with organic matter.  Included among the dead are a scarlet cardinal, a hummingbird, an unspeakably beautiful raptor, a butterfly, a snake and a squirrel.  The photos stand as eerily beautiful memorials and calls to action.

Another series, also created with a scanner, features porcelain and glass figurines silhouetted against black backgrounds.  These seem spookier and richer in possibility, perhaps because they aren’t as decorative (if dead things can be described with that word) or overtly political.

In a side room, a digital projection, Contents of a Whale’s Belly (2018), plays continuously, showing a succession of blue plastic objects — the same sort that routinely turn up in the

carcasses of beached marine mammals.  Some are easily identifiable (toy soldiers, a chip clip, beads, a plate), some aren’t.  Munson finds them in streams, along roadsides, in thrift stores and in garbage dumps.  Their sublime hue — the color of the earth when viewed from space – triggers a deeply troubling thought: that the view of nature we enjoy today will likely be buried beneath mountains of garbage.

Whether blue or pink, Munson’s collected and arranged detritus stands as a sharp reminder of the harm done by both gender stereotyping and reckless, thoughtless, excessive consumption. A combination of good looks and spectacular volume weaponize her powerful protest art.