“The fog of war” is a military phrase used to describe a lack of clarity experienced by commanders, armies or individual soldiers in the heat of battle.  The paintings, video and sculptures in Burning Song, Shiva Ahmadi’s debut show at Haines Gallery, suggest another possible meaning for this term.  Seductively beautiful even as they offer a nightmarish vision of a world of faceless figures roiled in conflict, Ahmadi’s scenes are at once cryptic and poetic, suggesting situations in which a mist of violence obscures any possible resolution.

Pooled washes of color fill each rectangular painting, suggesting places devoid of identifying features. Textured yet transparent fields of green, blue or ochre sometimes invoke water, blood or clouds of toxic smoke, or perhaps stains of age or use, reminding us that conflict is as old as civilization.  Hints of landscape also appear — a tree, a wall a tower — but figures are the main subjects.  Male and female, human and animal, their interactions are linked together with graceful, looping calligraphic lines that are alive as the bodies they connect.

Like fractured pieces of Arabic script, these marks invoke the terrifying idea of broken language, of voices that can no longer enunciate words, just sounds.

Ahmadi, an Iranian-American who works in the Bay Area, draws on the rich tradition of Persian miniatures, and though her pictures are much larger than those intimate, jewel-like creations meant for individual contemplation, the complexity of her compositions demands both the kind of close attention normally given to book illustrations as well as a stepping back to take in the sprawl of non-linear narrative. In Bird, a faceless turbaned figure sits on a golden throne covered with a delicate pattern of stylized vines.  A red stain on his naked upper body seeps downwards from the chair, leaking into the floating silhouette of two animals locked in conflict.  Above the beasts’ twinned bodies, a huge bird hovers, its body a dripping stain as well. Calligraphic lines both shackle the seated figure and connect it to the interlocked animals,hanging like viscera from the bird’s feet.  Arrows and blood drops fly through the cloudy pink wash surrounding them.

Two figures in Flying Carpet (2018) point towards an ominous cloud of viscera-like shapes and infernal devices that trail upwards out of the frame from the blackened, shredded rug.  The scene, like those depicted in other paintings, is flecked with what appear to be cheery bits of confetti. The artist describes these as a “sugarcoating” of ugly truths.

Similarly, in Ahmadi’s eight-minute video Ascend (2017), pretty floating bubbles become deadly weapons.  Here, the protagonists are a group of monkeys, similar to those seen in Lotus 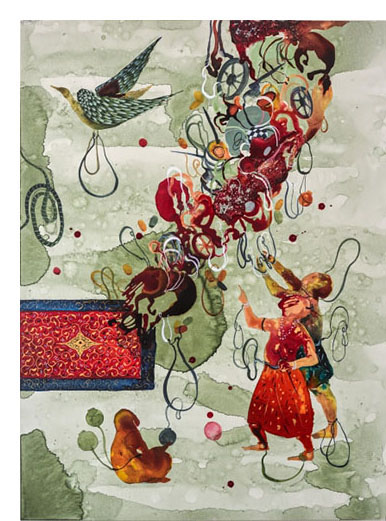 (2014), a video that was included in the Home Land Security exhibition presented at the Presidio in 2016 by the For-Site Foundation.  As they toss bubbles from hand to hand, the orbs transform into bombs and grenades.

Ascend was inspired in part by the drowning death of the Kurdish-Syrian child Alan Kurdi as his family fled Syria’s civil war.  In part of the video, angels — a presence in many world religions, including Islam, Christianity and Judaism — fly by overhead, one carrying the body of a little boy.  The gallery’s decision to present the work in a darkened space at a substantial scale makes every detail hauntingly visible, as the scene cuts from watery reflections of the monkeys tossing bubble-bombs, to a boat filled with figures in a murky sea, to a tiny body washing ashore.

As with Goya—another artist who considered the terrors of war and the price exacted by conflict  — some of the work in this exhibition is difficult to look at.  Three bulbous metal vessels – etched with complex patterns and topped with industrial screw closures — turn out to be Afghan pressure cookers.  Though different in shape and design from the ones we’re accustomed to seeing, they are essentially the same pots used in kitchens everywhere. Their use as improvised explosive devices (IEDs) has become equally widespread, killing combatants and civilians alike.

Simultaneously exquisite and awful, Ahmadi’s decorated pots are described as a reference to the domesticity of terror.  On two that the artist fashioned from Western pressure cookers, the

acid used to inscribe them ate through the metal completely. Only parts of the elaborate tracery remain, like windows broken out by a bomb blast. Peering through the openings reveals that the artist has piled fragments of metal, nails and other debris inside.

When cultures unravel, Ahmadi reminds us, the victims, whether they die in the conflict or while fleeing it, lose everything of beauty and value. This increasing uncertainty — about what is happening, why, and how it will be resolved — also becomes part of the fog of war.  Rather than offering slogans or answers, the works in Burning Song give voice to the anxiety of a world in which entire populations are displaced with nowhere to go.