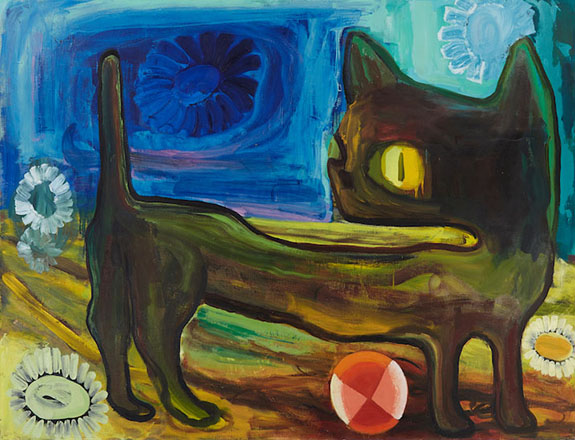 People throw around words like Symbolism and Surrealism when talking about Judith Linhares’ paintings.  Mention has also been made of her affection for underground comics (she was friends with R. Crumb long ago, a secret influence for a surprising number of artists) and her place in the vanguard of feminist artists, having come of age in the late ‘60s and ‘70s. Viewing Out of My Head, Linhares’ show at Anglim Gilbert brings other artists to mind — Charles Burchfield, Marsden Hartley, James Ensor and, in one utterly strange painting of a menacing kitten the size of a panther, Edvard Munch.

The curator Marcia Tucker coined a term for this type of work.  She called it Bad Painting, and around that title she built a groundbreaking 1978 exhibition at the New Museum of Contemporary Art that included Linhares and 13 other artists, most of whom were unknown in New York at that time.

A press release for the show described it as “an ironic title for ‘good painting’, which is characterized by deformation of the figure, a mixture of art-historical and non-art resources, and fantastic and irreverent content. In its disregard for accurate representation and its rejection of conventional attitudes about art, ‘bad’ painting is at once funny and moving, and often scandalous in its scorn for the standards of good taste.”

In the end, any such designations only attempt to create some kind of familiar landmark in a dreamy (sometimes nightmarish) landscape. Linhares, an extraordinarily gifted and highly original painter, makes work that, if you get right down to it, looks only like itself. Describing her practice, the artist has said that she makes her paintings one brushstroke at a time.  It is possible to imagine that: big brushes, wielded with a calm authority (or maybe at times a mad Dionysian enthusiasm), building pictures of women, peculiar animals, flowers and fantastic landscapes, in a vivid, warm palette. Every stroke is necessary, intentional, and contributes to the whole.

The work is nominally representational, in that there are things we can recognize — people, trees, animals — but the influence of gestural abstraction is unmistakable. What it seems to be contributing is an energy and vitality that makes viewers unfamiliar with Linhares assume that she must be a young artist.  Like other painters her age (she was born in 1940) she attended art school during the height of the influence of Abstract Expressionism. Still, her education took place in the Bay Area, where painters like David Park, Elmer Bischoff and Richard Diebenkorn were wrestling with both a return to figuration and how to do it in a contemporary language.

At first glance, the exhibition at Anglim Gilbert seems like it could be the most common kind of gallery show: a grouping of recent works from the past five years. Closer examination reveals that the range is nearly five decades, though only a couple of paintings and a small gouache sketch are from the ‘70s.  Most are from the ‘90s or the early aughts, with two from 2017 neatly bookending the time line.  What they collectively demonstrate is that Linhares’ way of painting—I hesitate to demean it with a word like style—has been vital, fresh and extraordinarily consistent for a really long time.

There is something archetypal about many of these images: a portrait of an isolated tree, framed by rushing water; stylized flowers in bulbous vases; women in giant, princess-y ball gowns, and single animals in front of rainbow-hued backgrounds. There’s even a hollow-eyed sphinx, surrounded by giant daisies.  Though Linhares may not set out to depict mythical/ fairy tale narratives, “they show up,” as they artist once put it in an interview.  Like the fables set down by the brothers Grimm, however, these aren’t the child-appropriate stories that the paintings’ bright palettes might fool you into thinking they are.  Instead, Linhares’ pictures embody an uneasy combination of possibilities, some comic or grotesque. There are often allusions to nature and the great outdoors– though not necessarily its benevolent side. In Plenty (2002), a crowned goddess (her sweeping golden dress recalls Glinda the Good Witch in the Wizard of Oz) ladles something out to the little naked girls who hover nearby, seemingly

warmed by her glow; but there are strange creatures — all head, no body — lurking in the forest’s blue-gray shadows. In Stir (2006), another amber-hued figure messes about with a spoon, this time stirring a big pot resting on a campfire.  A naked green woman reclines in the foreground, toasting her toes in the merry blaze, which seems poised to burn down the odd ramshackle log cabin behind her.  Are the hills in the distance covered with flowers, or are those clear-cut stumps?  And there’s something sinister about almost all of the paintings of animals in the show, whether it’s the pony getting ready to leap off the canvas onto your lap in Pony (1991), the maniacally grinning dog in Hound (1991) or the aforementioned Kitten (1990).  I wouldn’t want to be alone in a room with any one of them — not even the lagomorph in Rabbit (2005).

In interviews, Linhares has described the months’ long process that goes into the completion of each painting. It begins with a series of small gouache sketches, as she elicits an image gradually out of a colored ground often built out of complementary hues. These help her to solidify her ideas, emerging out of the brushstrokes in the form of an intuitive, sometimes dream-derived image. Only when she has “internalized the image” does she work on canvas with oil paint.

Possibly the most unforgettable painting in the show is Tricks for You (1992). A red-haired woman stands on her hands in front of a striped curtain (a circus tent?) that falls onto the ground, curving towards us. Her body is bent at the waist, and her enormous bare feet thrust forward as well, practically pushing against each side of the picture.  Her face is little more than a quick set of gestures — a grimacing jack o’lantern. And, even though her crotch is practically the center of the painting, Linhares is such a wizard with the brush that your gaze goes everywhere but there: into the minty green shadows cast by those legs on the underside of the performer’s skirt, on her strange crown of carroty hair, or on the mesmerizing stripes shifting color across the canvas in hues of purple-brown and yellow. The light is fantastic. You just can’t look away.

The show’s title, Out of My Head, has more than one possible meaning. There’s the obvious one: of being possessed or crazy, controlled by something other than sanity or reason. But there’s also the possibility that this phrase refers to the idea of making something up and then transferring it, with a combination of intuition and physical knowledge, from imagination to image, down through the brush and out in to the world.  Or maybe it’s both.

Judith Linhares, Out of My Head @ Anglim Gilbert Gallery, through February 10, 2018.