Working with studio detritus and textile scraps scavenged from sweatshops, Julia Couzens makes art that occupies the outer edge of what she calls “coherent illegibility.”  Evidence can be seen in installations that sprawl parasitically across walls, in ungainly cloth bundles, and in hand-sewn “blanket drawings” whose visual impact falls somewhere between that of treasure maps and the ancient Peruvian geoglyphs known as Nazca lines.

These decidedly Arte Povera/outsider-ish inclinations trace to the start of the artist’s career.  After earning an MFA degree from UC Davis, she burst onto the scene in the late 1980s with a series of deliciously perverse charcoal figure drawings that the public devoured.  By the mid-1990s, however, the artist found herself at odds with her own inclinations, rebelling against “articulated gestures and pictures” and just about anything else that could be perceived as “contrived or mannered composition.”  Memorable breakaway moments came at the Crocker Art 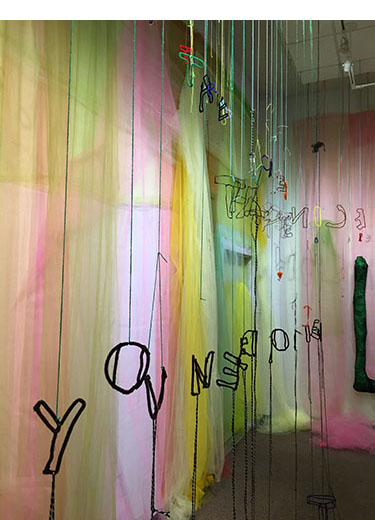 Museum in 1995 where she filled a wall with several thousand wagging tongues made from Sculpey (polymer clay), and, at the Sacramento Center for Contemporary Art where, in 2005, she treated crushed metal cages and household objects like fetishes, wrapping them in tape, yarn and fabric. Both efforts had the feel of things scrounged from the set design shops of grade-B sci-fi films.

Two concurrent solo exhibitions of current work, Last Words at Sac State University Library Gallery and #idigress at JayJay, offer a quasi-retrospective look at the methods and conceptual concerns that have undergirded the artist’s output over the past 15 years.  The first is a room-sized installation in which Couzens takes deathbed utterances and subjects them to a variety of aesthetic treatments.  They range from hand-sewn inscriptions on blankets, (dimly lit by lamps once owned by the artist’s mother), to a stunningly intricate, wall-mounted sculpture made of shaved pipe cleaners (whose barely legible shapes trace out the words “I don’t smell good”) to a cat’s cradle of threaded nails conveying Pancho Villa’s last, but ultimately vacant, last wish: “Tell them I said something.”

The quotes divide more or less equally between those the artist solicited from friends and colleagues and others she culled from history, literature and pop culture.  Many in the first group are heart-felt but hopelessly maudlin.  Others are LOL funny (“Don’t order the fish”), death-taunting (“Pour me a really big gin”) sublime (“Bye”) and dumbfounding (“Please turn on Fox

News.”). In their variety, these dying words point to the infinite range of potential human responses to an event whose character and timing can’t be predicted.  Some like Steve Jobs’ (“Oh wow. Oh wow. Oh wow.”) are instantly recognizable, as are those ripped from the headlines, like Philando Castile’s (“I wasn’t reaching for it”) and Namkai-Meche’s (“Tell everyone on this train I love them.”)

The exhibition’s ostensible centerpiece  — “I can’t breathe” – did not come from Eric Garner, the Staten Island man choked to death by New York police; it came from a friend of the artist.  But, since none of the quotes are identified, viewers will likely think the words are Garner’s since his last audible gasp long ago became a rallying cry for Black Lives Matter.  Couzens made it visual by creating letters from long cylinders of crumpled paper wrapped in clear tape.  They hang from the ceiling and rotate slowly with the air currents, calling to mind giant sausages.  In other parts of the exhibition, where flimsier characters made of yarn or bent pipe cleaners hang from slender threads against iridescent backdrops of multi-colored tulle, the letters spin more easily, making legibility difficult.  Thus, the effort of deciphering them becomes akin to the act of moving in close to hear a dying person’s last words, a pitch-perfect bit of mimesis.

Here, as with past installations, Couzens succeeds by both modulating and sublimating her virtuosity to the needs of the show, which, contrary to what you may think, is not a tribute to the unnamed dead.  Rather, it’s a gimlet-eyed reflection on the unsparing, abject character of death itself – a point underscored by the Arte Povera approach Couzens takes to making these last words visual.

The show at JayJay drives in the opposite direction; it serves as a tidy summation of the material innovations that have taken the artist to the present moment.  Here, the focus is on the aforementioned bundles: brightly colored heaps of cloth, string, clothing and tinsel that are lashed to wood panels and wall-mounted.  Five, of varying sizes, are on display.  In these, viewers may sense close kinships to the fiber-based works of Judith Scott, a bona fide outsider artist whose work came to the fore after decades of obscurity.  Couzens hadn’t heard of Scott until long after she’d starting making her own bundles, and neither, for that matter, had anyone else until Creative Growth brought her to Oakland in 1987.  Scott was born with Down’s syndrome and later became deaf, so it’s difficult to speculate about what motivated her.  Couzens work arises from an unwavering commitment to defying visual logic and to making physical her psycho-motor compulsions.  These acts of conscious defiance have, of course, engendered an aesthetic all their own, which Couzens works hard to subvert.  Nevertheless, by aggregating fiber-based materials as she does, Couzens invests them with an energy that belies their humble origins, making these objects appear as if they were capable of exploding, should the threads, cloth strips and bungee cords that bind them become undone.

Two other works, Blanket Drawing and Coming Full Circle in August, also command attention.  In the first, Couzens took a piece of heavily creased tissue paper and sewed lengths of fabric to it, producing ant lines of stitching that call to mind a topographic map, except that in this the contours are real, not imaginary.  The second is a large-scale assemblage made of blanket scraps, tulle, packing material and a piece of stuffed fabric that may remind you of the macabre appendages Bruce Conner used in his nylon-laced assemblages.  This nod to Conner, if that is in fact what it is, doesn’t impart menace or ghoulishness; what piece resembles most is an abstract painting made of animal hides, something Conner surely would have approved of.

Sharing the bill with Couzens at JayJay is John Yoyogi Fortes, a figurative/abstract painter whose inclinations lean toward street art, comics and the sort of appropriative methods that held sway in New York in the 1980s. His specialty is the urban fever dream, a non-narrative realm populated by comic characters, graffiti and racist caricatures of yore, all of which seemed

designed to induce or evoke free-floating psychic pain.  The forms laid down in layers, are hand-painted, stenciled and heavily abraded.  In these works we can detect many influences: David Salle (contour drawing), Philip Guston (dunce caps, bricks), Robert Crumb (hairy legs), Jean Michel Basquiat and Raymond Saunders (handwritten text scrawls), and Enrique Chagoya (in foot-stomped skulls and blood fountains he used in his epic anti-colonialist paintings of the late 1980s and early 1990s).  Somewhere in all of this there’s a social/political critique lurking, but what it might be is unclear.  Like many of the lowbrow/street artists with whom Fortes also seems to be aligned, he avoids overt proscriptions or confrontations, preferring instead to juggle live ammunition and see what ignites.