Montalvo Arts Center long ago recognized that its most valuable asset is the ground on which it stands. It’s a bona fide paradise spot.  Situated on 175 acres at the base of the Santa Cruz Mountains in Saratoga, it commands stunning views of the Santa Clara Valley, accessible via trails that wind 1,200 feet above an Italianate villa built by James Duval Phelan (1861-1930), California’s first popularly elected Senator.  When he deeded the estate to the public, he stipulated that art play a role in its future.  Montalvo’s caretakers, both horticultural and curatorial, have done a fine job of carrying out his wishes.   Today Montalvo features visual art exhibitions, concerts, lectures and readings, many of them undertaken by artists-in-residence, 60 each year.

Other places around the Bay Area offer art and music with similarly majestic sightlines.  But when it comes integrating “built environments” with native surroundings, I can’t think of another place, other than the di Rosa Preserve in Napa, that is as exquisitely conceived and so accommodating to visitors.  There are, to be sure, other organizations mounting shows of contemporary art in dramatic settings.  For-Site Foundation and Ars Citizen, both in San

Francisco, have offered exhibitions of contemporary art at the Presidio, Alcatraz and Fort Mason. (The San Francisco Art Institute will soon to join them at the latter venue with site-specific installations.)  These, however, are essentially urban affairs, and they lean heavily on the histories of those sites for content and context.  Montalvo does, too. It’s commissioned artists to make works that deal with the social, agricultural and industrial history of the South Bay; but its strongest exhibitions, whether on the grounds or in its gallery, have always hewed close to nature.

To see it as Phelan once did, stand in the garden he created below the villa and look uphill.  Stare past cacti, flowering shrubs, a Roman-styled “Love Temple” and the villa itself, and you’ll see peaks jutting through fog and clouds.  This valley-to-sky view of the estate and its immediate environs provides the backdrop for a series of sound-based installations that Montalvo has engineered to engage visitors – in particular those who more adept at navigating virtual topographies than real ones. These enticements are packaged and presented in two concurrently running programs: now hear this! an exercise in listening and Soundings: Lucas Artists Composer Fellows.

The first features five site-specific works that were commissioned to be heard at select locations on the grounds. These, says Curator Donna Conwell, are “about listening in relationship to the natural environment…unsettling for the listener what is real or invented in the sonic landscapes around us.” The second features eight compositions licensed from previous Lucas Artist Composer Fellows who are selected every three years by international juries.  Though they weren’t created as site-specific works, they fill that role, albeit in an unconventional way, which I’ll explain shortly.  Conwell, who worked closely with both groups, describes the latter as “more of a playlist or soundtrack to the experience of being at Montalvo.” 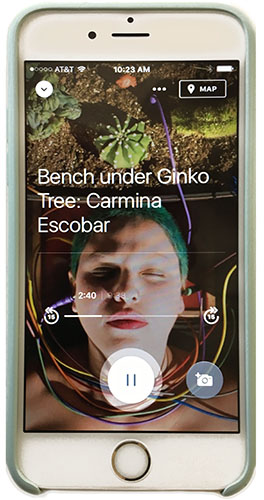 To guide visitors through the exhibition, Montalvo partnered with Detour, an online walking tour platform that operates like a GPS system wedded to an audio streaming service.  You can download it free to your smartphone.

At first I chafed at using it because what I wanted most was to walk the grounds untethered.  But the utility of the app and its ease of use quickly vanquished my qualms.  Its navigational features worked flawlessly, pointing out landmarks, directing me up and down paths, guiding me back and forth across the great lawn that divides the property, escorting me to an amphitheater and an adjacent garden, down a gully, and finally, over a footbridge to a Romanesque cupola known as The Belvedere — a word I previously associated only with a small town in Marin and a certain extinct model of Plymouth.

At each juncture, artists deliver short spiels about their pieces, all of them informative and well worth hearing.  Lest you become distracted and veer off-course as I did several times, a compass at the top of your screen will, if you heed it, keep you on-track.  So will on-screen photos of each destination.  Another plus is that you can stop or move backwards or forwards at any point in the tour, which is split into two segments on the Detour site, Soundings: Volume 1 and 2.

The only thing not adequately explained, either by the app or by the printed program guide, is that the site-specific works – those designed specifically to be heard in situ, aren’t accessible on Detour’s website. Only the Soundings offerings are.  This is confusing because the two physically overlap.  The best approach I found after walking the grounds for an afternoon is to simply go with the flow.  When you reach a spot where the audio content comes at you from two sources — the environment and your phone – simply remove your ear buds and listen live.

That is what I did after being led by the app to the Italianate garden below the villa.  There, with ear buds removed, I took in in the well-mannered cacophony of Hugh Livingston’s Birds of Invention: a Field Opera. In this, an orchestral mix of voices, drums, industrial and insect sounds emanates from audio transducers mounted on a glass plate.  Together, they electrify an environment already teeming with bird cries and the sounds of lizards and squirrels rustling dry brush.  The overlay creates a disorienting sonic topography that may, at certain junctures, lead you to question your senses.  Nearby, I encountered Taraneh Hemani’s One Voice (Yek Seda), a “sculpture” made of steel tubes which you’re encouraged to bang with mallets.  I grabbed a pair and made like Bobby Hutcherson.  But the sounds that emerged were more Cage-ian than jazz-like, and a good deal less sonorous than either, owing to how quickly the sounds decayed when I struck the tubes.

Less interactive, but more engaging was Hyphae, an installation on the switchback trail that separates Montalvo’s upper grounds from the live/work spaces that house the Lucas Artist Residents.  On this slope, Oakland-based artists Shane A. Myrbek and Emily Shisko installed a network of speakers, along with harp-like arrays of strings attached to trees, which the artists used to represent “underground fungal networks” capable of passing “nutrients,

defense signals, and even acknowledgement of kin.”  I felt no such kinship.  But I did register a huge array of sounds: swarming insects, sirens, low rumblings, bells, electronic blips and a range of other noises that might be likened to human humming, a chorus of amplified tuning forks, bowed bass fiddles and the reverberant roar heard when you press a seashell up to your ear.  Coming as they did from seemingly every direction, these sounds, like those of Livingston’s installation, made me acutely aware of the terrain and my place in it.

When I reversed course and headed uphill other sounds beckoned from sources unseen.  These, I later discovered, were triggered by an electro-mechanical rocking chair built by Walter Kitundu.  It sits on a circular platform on the great lawn adjacent to a giant bunya pine, where several years back, as part of Montalvo’s Nature and Creative Capital program, Ali Naschke-Messing, embedded reflective slivers of plexiglas into the elephantine folds of the tree’s bark. That the rocker failed to produce audible sounds while I sat in it hardly mattered.  Focusing on the tree and its glass slivers, I was reminded of a church I once visited in Chamula, Mexico.  It contained mirrored altars whose purpose, I was told, was to reflect back onto visitors whatever bad thoughts they might be harboring.  By purging oneself of such thoughts, so the lore went, you could avoid being contaminated by your own reflections.  Rocking in the sun and the silence before that tree (and all that lay before me) produced a similar cleansing effect.

The Soundings selections behave differently.  Where the site-specific works alter your perception of the environment by deepening your physical engagement with it, these compositions use the setting to pull you deeper into the music.  To be honest, I’d have loved hearing these recordings anywhere.  But in these woods there’s a synesthetic exchange that takes place between listener and recording, and it confers psycho-acoustic characteristics on the music you might not otherwise catch.  Every selection is worthy of extended contemplation.

Highlights?  After listening to only one track, Mother of Time, I can say without reservation that Jen Shyu is the most arresting vocalist I’ve heard in recent memory. Her poetry-based incantations, in English and Korean, made me think of Abbey Lincoln and what she might have sounded like had she drawn on Asian sources rather than African. Her searing exhortations and empathetic funk/free-jazz accompaniment cast a spell that seemed in harmony with the setting: the aforementioned Love Temple. Its centerpiece, a fountain ringed by imps, was the only part of Montalvo to be damaged by the 1989 Loma Prieta earthquake, so it seemed fitting that Conwell chose it as the site for Mike Gamble’s composition, Seismic Retrofit, named for the big quake that is predicted to someday hit the Pacific Northwest.  For this, the Portland-based artist used a classical guitar, fretting it to produce chords and melody, drumming the body with his fingers to make percussive sounds, both of which recall the rainforest visions conjured in the mid-to late-1970s by the Brazilian virtuoso Egberto Gismonti. I also enjoyed my time in and around the Belvedere listening to Nina Young’s Temenos, a tense, haunting piece for violin and electronics.  The wildest, wackiest composition in the show, Artic Light, comes from Motoko Honda, a pianist.  The recording is an improvised, unedited, live performance that begins in a Satie/Debussy mode before shifting to thunderous chords that fade just as quickly back to quietude: a seven-minute emotional rollercoaster.

The two biggest names on the bill, Henry Threadgill, an original member of Association for the Advancement of Creative Musicians (AACM), and Wayne Horvitz, a mainstay of the downtown New York jazz scene, both contribute memorable works. Threadgill’s piece, Noisy Flowers, reminded me of the Assad Brothers, the avant-garde Brazilian guitar duo.  It, too, starts off soft and slow, interleaving guitar and dissonant piano strains; by the end it’s a foot-stomping dirge.  Horvitz’s piece, for strings, clarinet and voice, 55: Music & Dance in Concrete, originated from four days of performances inside a bunker at Fort Worden, Wash.  Out of these the composer extracted samples.  The result is a spooky collage of industrial and orchestral sounds that brings to mind a mash-up of the Mad Men theme and the eeriest parts of Johnny Greenwood’s soundtrack for There Will be Blood.

More exhibitions like this one are on the way. Conwell informs that Montalvo is commissioning Howard Hersh as a Lucas Artists Composer Fellow to create a site-specific composition. It premiers next April, and will include instrumental music, a children’s choir, poetry readings and the spoken testimony of victims of political, ethnic and religious persecution – “part of an effort,” Conwell says, “to explore the psychological function of the forest.”

Like a lot of arts institutions these days, Montalvo has glimpsed the future, and it sees it residing (quite literally) in “the cloud.”  But if past is prologue, this programming will keep visitors firmly rooted to the soil.

Note: You can listen to all of the music mentioned in this review by downloading the Detour app onto your smartphone and selecting Soundings.  However, the app runs only on mobile devices.

Read reviews of past exhibitions at Montalvo Arts Center.