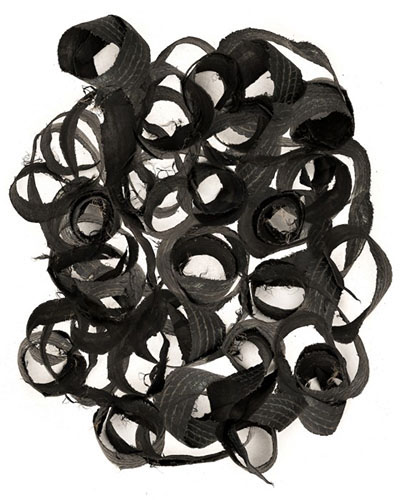 If you see a lanky, 40-something guy roaming the shoulders of LA-area freeways don’t fret.  He’s not a stranded motorist or an escapee from a prison work crew, just Ken Fandell collecting old recaps. His photos of them — made against plain white backdrops and stitched together digitally into wispy, tangled masses – might easily be taken for charcoal drawings because of their impenetrably sooty shadow areas.  Film die-hards who pine for the finer tonal gradations afforded by the gelatin silver process regard such pile-ups of powdered pigment as fatal flaws.  Fandell, in a show called Blowouts Bricks Lines, uses them to erase the perceptible difference between drawing and photography.

The artist admits he could have more easily collected his specimens from a tire dump rather than risk life and limb skirting speeding cars.  But that, he told a gallery audience, “would be cheating.”  Fandell didn’t explain why, but the answer seems embedded in the pictures themselves; lyrically, and sometimes even comically, they give off intimations of the brute force that tore rubber from wheels and flung it, shredded and curled, to the roadside.  By combining as many as 45 individual tire “portraits” into writhing masses of twisted tread  – some densely packed, others loosely elongated — he achieves something akin to action painting.

Fandell says he got the idea for working this way from Franz Kline (1910,1962), who, instead of executing big, bodily gestures as was common among AbEx painters, projected magnified images of drawings before translating them to canvas.  Fandell’s rough-hewn “gesturalism,” though it’s 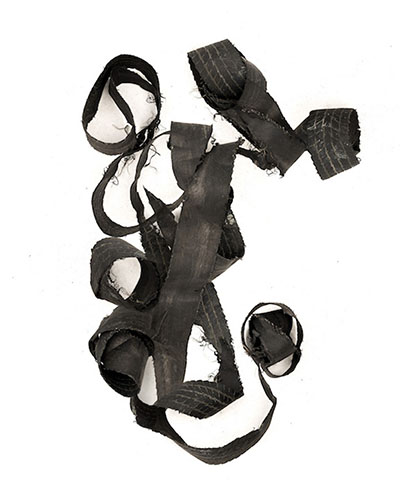 derived from readymades – not physical mark making — is certainly analogous to Kline’s in that both lean hard on mechanical methods.  Robert Rauschenberg’s Automobile Tire Print (1953) seems relevant, too.  For this the artist directed John Cage to repeatedly drive a Model A Ford through black paint and onto a 22-foot length of paper, creating a seminal example of serialism.   Guy Overfelt, the SF auto-enthusiast-turned-artist, carried that idea forward using a hopped-up Trans-Am to literally burn rubber onto paper – very thick paper.

Fandell’s interest in serial image making, as this and prior shows demonstrate, goes well beyond things automotive.  Over the years he’s experimented with geometric abstraction (a la early Ross Bleckner) by photographing hand-drawn sharpie lines; paid homage to Josef Albers and Hans Hofmann (with images of tricolor duct tape rectangles); used language in a kind of reductionist Barbara Kruger mode (to show how the simple reordering of word pairs can alter meaning); and made arresting composite photos of clouds that closely mirror (in manner of execution) those seen here.

This show, as the title indicates, also includes images of bricks and lines. The bricks, superimposed semi-transparently atop one another, don’t register much impact. The lines, printed singly, paired and three-abreast — each about as wide as a pencil — are practically unrecognizable as palm trees until they show up elsewhere in an 18-page a codex book, magnified and segmented.  Peruse it and you can practically feel yourself shinnying up the tree.

A similarly structured book is devoted to the Blowouts, which are what ultimately carry the show.  Fandell didn’t intend for them to serve as an environmental treatise– or as a paean to the fast-fading pleasures of driving — but given all the dark hints of burnt rubber contained within, it's hard not to see them that way.  Fifty years hence, I can imagine them in different context, in a show with a title like Off Ramp: The Petrochemical Era Remembered.