Once seen, the art of Taro Hattori isn’t easily forgotten.  He’s best known for monumental cardboard sculptures, like the giant copulating insects displayed at Art Market in 2013 and the airplane that appeared to have crash landed at the San Jose ICA in 2016.

After Donald Trump was inaugurated, Hattori began driving a mobile teahouse around the Bay Area. He calls it Rolling Counterpoint.  The idea: serve tea to friends and strangers and engage them in conversations about identity and community.  These conversations, he hopes, will raise broader questions about the sorts of things that might produce real change. He begins with open-ended queries (What divides us?  What does belonging mean to you?) and goes from there, making no presumptions about where the process might lead.

Below are excerpts from an email exchange I conducted with the artist and with Donna Conwell, curator of Lucas Artists Programs at Montalvo Arts Center, the sponsor of the project and the location of Rolling Counterpoint’s next series of conversations, on Sunday May 21, at 5 p.m.

Rolling Counterpoint is a community conversation project organized around the act of sharing tea. I created two teahouses: a stationary unit at Montalvo Arts Center and a mobile one built on a trailer that is traveling to various sites around the Bay Area.  Though the process of sharing tea, I invite community members to share their personal stories and experiences about difficult and polarizing social issues, and together we examine what is it that divides us and how can we create a more inclusive sense of ‘we.’ Collectively, we develop and share a set of follow up questions that as a community we can hold as a point of inspiration for a better future.

Would it be safe to assume that the 2016 election played a role in motivating you to launch the project?

This project actually began quite a bit earlier. It came about as a confluence of several factors: the specific history of Montalvo’s original benefactor, James Duval Phelan and his role in promoting legislation to restrict Asian immigration, and my personal background of being a Japanese immigrant in the US.  Both played a huge role and prompted me to consider how I could use my outsider status as a way to bridge diverse people and perspectives. The sense of futility I felt after the 2016 presidential debates was also a big factor, for sure.

Donna Conwell: We invited Taro to consider developing a new sculpture-based work for our grounds in May 2016, as part of Montalvo’s Art on the Grounds program. We were interested in exploring what kinds of important conversations a work drawing inspiration from a Japanese teahouse could open up for our publics and for us as an institution about our own legacy.

The first phase of Taro’s project — the onsite teahouse — premiered in the summer of 2016. As the presidential debates heated up in the fall, the parallels between the divisive political rhetoric, particularly around immigration and immigrants, and that of Phelan’s own involvement with the Asian exclusion acts of the last century became starkly apparent. This led directly into our first collaboration with the Audrey Edna Butcher Civil Liberties Education Initiative of the California History Center at De Anza College, the Japanese American Museum of San Jose; and the American Muslim Voice Foundation.  In conjunction with the 75th anniversary of Executive Order 9066, which authorized the mass forced removal and incarceration of Japanese

Americans during World War II, Taro brought Rolling Counterpoint to the Japanese American Museum and invited community members to share histories of scapegoating and social exclusion. We were all interested in facilitating dialogue between Japanese Americans and Muslim Americans as well as others from the South Bay’s diverse communities concerned with creating safe spaces and building new alliances in light of heightened attacks on immigrant communities, as well as threats of mass deportation and registries for Muslim Americans.

You’ve spoken of using the teahouse as a venue for “difficult conversations.”  How would you characterize those you’ve had?

As this project has evolved, I have come to realize that the intimate space of the teahouse and the act of sharing tea creates a very comfortable setting for talking. I don’t think I would necessarily characterize these conversations as “difficult” even though this is what I first imagined would take place. Conversation often became a communal effort to tackle difficult situations or issues — either personal or social. Sometimes, probably because of my psychology background, I found myself in the role of a counselor, often asking participants personally difficult questions where they would delve into their own traumas. 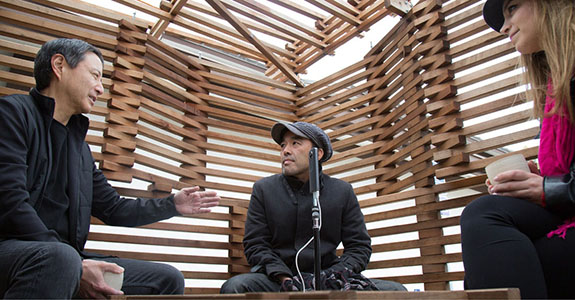 DC: To me it often seems like the teahouse becomes a space of vulnerability, where participants are able to open up and often experience a sense of release in being able to express themselves and have their voices heard. I was surprised by how many people wanted to participate. It feels like a moment when people are feeling quite traumatized by the political situation and having a space to safely speak feels very important and necessary.

As a facilitator how do you operate?  How do you prepare?

My role is to provide a safe space for the participants by welcoming them, starting conversations casually, sharing tea, explaining the history of the teahouse and how I interpreted it. Then, I ask questions that delve into how social issues are intertwined in their personal lives.  I prepare myself by studying the possible issues that may come up, staying open and curious so that I can talk with every single person who participates.

Anyone can participate.  They can drop in at the various events we are holding around the Bay Area.  Or sign up online at rollingcounterpoint.com. Or participate on the website by leaving a voice mail or text.  For each set of conversations we also reach out to community members to get involved and speak about the issues and concerns they have. Anyone can suggest new questions to drive the conversation. We began with two: “What divides us?” and “What does belonging mean to you?” We have been adding to these questions as we go.

What expectations did you have going in?

You state specific goals: promoting empathy, discourse, rationality, peace.  The teahouse has a history of doing that in Japan.  Can you describe it?

Sen no Rikyu who was the most important pioneer of the Japanese tea ceremony as well as a political figure under the rule of Hideyoshi Toyotomi in the 16th century. He would invite political opponents to a teahouse as a means of mediating disputes and lessening tensions. He even invited Hideyoshi’s most forceful opponent, Tokugawa, to share tea. Riky? designed a very small and low entrance to the teahouse as a way of suggesting everybody is equal once they enter because they must lower their heads to come in. His teachings promote careful attention and care to each individual who participates and the details of tea ceremony. This is definitely related to the idea of empathy and rationality.

DC: It has also been interesting to see how you have developed your own tea ceremony traditions. For example, you collaborated with a ceramist to create the cups to share tea with participants. You invite teahouse guests to smash their cups at the end of the ceremony as a way of symbolizing the fragility of community.

What are some of the more memorable or surprising encounters you’ve had?

I was surprised by how many people mentioned struggles over cross-generational trauma that their older relatives or ancestors had experienced, and how they had suffered personally.  A 94-year-old Japanese American who’d  been in an internment camp told me about how he’d experienced particularly harsh racism in the ‘60s while working in construction.  A Cambodian genocide survivor who left her country when she was six said she lost her memory of all that came before; she now runs an organization that helps trauma victims.  A person of Syrian descent described being abused after 9/11 by an elementary school teacher for having a Middle Eastern surname.

People mainly know you as a sculptor, for large-scale cardboard pieces. Does this project represent a shift in your orientation toward performance and/or social practice?

Conceptually there is actually no shift. I am always trying to instigate personal responses from viewers. For me, the viewers’ experience is an integral part of my practice. Many of my large-scale sculpture pieces are rooted in an exploration of historic or social conflicts. It has been natural for me to start dealing directly with people and society as a medium.