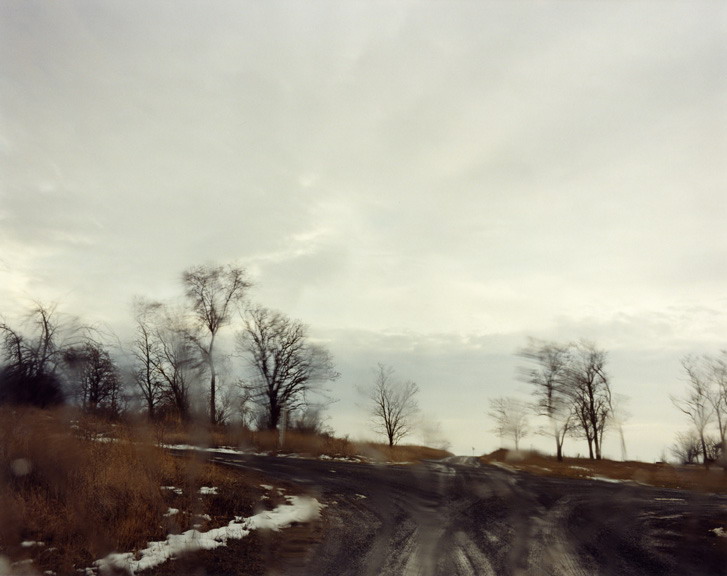 It’s hard not to admire Todd Hido.  Unlike so many contemporary photographers who conflate size with substance and monumental banality with high concept, Hido, takes a decidedly contrarian approach: His blurry, modestly scaled pictures of rural roads to nowhere shot from behind the wheel of his car place Pictorialism into a postmodern context and put a new spin on the all-American themes of rootlessness and alienation.  Psychically, geographically and artistically, the Ohio-born, Bay Area-based photographer has covered a lot of ground over the past decade.  He’s made forlorn portraits of provocatively posed women in cheap motel rooms; eerie, voyeuristic night shots of suburban houses; and landscapes defined by "bad" light, bare trees, rutted roads and receding telephone poles.  Sixteen of the latter, which appeared in "A Road Divided," cement Hido’s reputation for wresting beauty from "ugliness" and for using weather patterns to describe states of mind.  Admittedly, such transformations aren’t unique to contemporary photography; roadside lens work has been a mainstay of the medium at least since the 1950s.  But Hido’s method of shooting through a wet, dirty windshield produces unexpected painterly results.  These C-prints, created on film and in color with long, hand-held exposures, feel almost monochromatic even when they’re not thanks to his recording of diffused light through glass and grime.  This method softens the focus of everything before Hido’s lens and imparts painterly qualities to what might otherwise be unremarkable images. 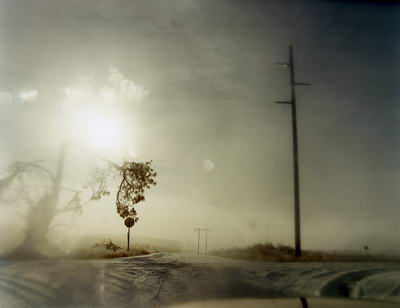 "Untitled 5348," an image of a ragged cyclone fence climbing a hill, looks more like a chalk pastel drawing than a photograph.  Every element in it – the dull light, the sagging fence, the rain-slicked asphalt and the broken sidewalk – speaks of decrepitude.  Yet it radiates an alluring, abject beauty.  In "Untitled 5462," one of the few images in which no road is present, dim light plays upon a field in a way that suggests an unlikely conjoining of aquatic plant life to a rare (at least in the Hido canon) swatch of blue sky.  "Untitled 6242," a convergence of two muddy tracks, becomes further muddled by shadowy rivulets that crisscross the frame.  They’re nothing but water on a windshield, but the distortion they produce creates a dissonance between what we see and what we feel.  Meaning, the picture generates more psychic tension than any physical sensation of dampness or cold.  That quality applies to most of the work in this cycle. 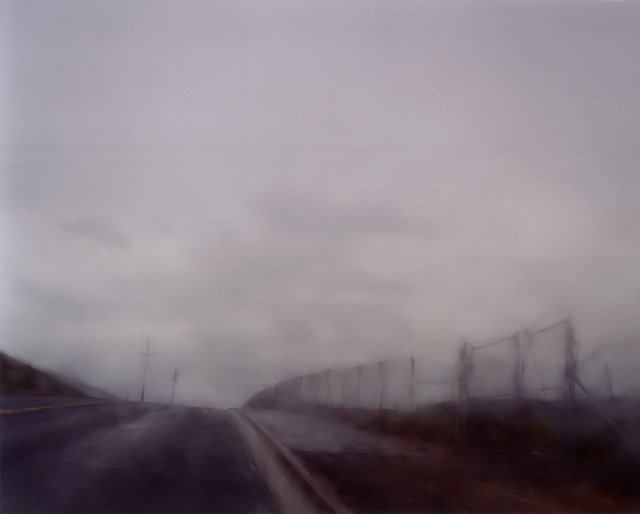 The fact that everything in this exhibit is twice-mediated certainly helps.  But there are other, less obvious, forces at work.  One is the repetition of similar-looking scenes that can’t be traced to a specific locale; another is the reoccurrence of roads that start nowhere and lead to implied (and sometimes literal) dead ends. Equally important is the one factor we can’t see: the photographer’s working method.  Unlike artists who produce bodies of work serially, Hido pursues his interests in portraiture and landscape simultaneously, and he occasionally presents a full array of his output.  For example, in "Between the Two," which appeared both as an exhibit and a book (Nazraeli Press, 2007), he combined, on alternating pages, sleazy nudes, dwellings emptied by foreclosures, barren landscapes and glowing nocturnal interiors that could have been backdrops for Gregory Crewdson setups.   Thus, if you take "A Road Divided" as it’s intended, as one part of a multi-faceted oeuvre, it represents a gritty vision of American life – one that transcends Pictorialism and New Topographics, the two obvious categories to which Hido has been linked.  Hido, as it turns out, operates in a different realm, one I’ll call, for lack of a better term, psychographics.  It’s a territory covered by many photographers, but most significantly by his former mentor, Larry Sultan, whose 2004 series, "The Valley," about the SoCal porno industry, explored a similar sense of anomie.  Within that context, Hido is lot closer in spirit to the film director David Lynch than he is to, say, Alfred Stieglitz.  Let’s just hope he doesn’t pick up a bottle of Windex and a squeegee the next time he’s scouring America’s outback.