Steve Kaltenbach is one of the most intriguing figures in conceptual art. Best known for his anonymous ads in Artforum that encouraged readers to “Build a Reputation” and “Perpetuate a Hoax” — and for his cryptic Time Capsules whose inscriptions mixed self-deprecating humor with egocentric boasts — Kaltenbach was among the figureheads of the New York avant-garde in the late ‘60s. He mixed Duchampian absurdism with text-based object making to lampoon practically every myth the art world was manufacturing and refining. From the inflated notions of celebrity that took hold in Warhol’s heyday to the superheated art valuations that recently fell to Earth, Kaltenbach skewered them all without sparing himself. 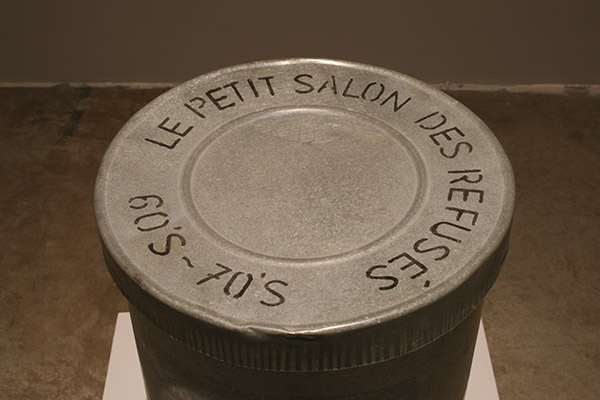 At the height of his renown in 1970, Kaltenbach disappeared from the scene after accepting a teaching position at Sac State. But as “Nuclear Projects and Other Works” powerfully attests, he hasn’t stopped innovating.  In this four-decade survey, Kaltenbach showed that the strategies he employed then are equally valid now.

His undated Time Capsules, which he’s built continuously since 1967, were the exhibition’s focal point. Made of various metals and fashioned into cylinders, disks, canisters and boxes, their content remains a mystery.  It could be enriched uranium, the artist’s navel lint or nothing at all. Kaltenbach has never said, and it’s safe to assume no curator will ever wield a blowtorch to find out.  With their epitaph-like inscriptions (“Bury with the Artist,” “Nothing of Great Value,” “Open Before My Retrospective at the Tate in London”), they operate in much the same way that Barbara Kruger’s and Jenny Holzer’s aphorisms did in subsequent decades: they force viewers to question their perceptions and values.
“Bad Ideas” (2002-08), a series of works on paper, appear to assault the hubris of the Bush era.  They suggest various ways the world’s arsenal of ICBM’s could be deployed to blast holes in the cosmos for entertainment and sport. Also on display was a replica of an atom bomb, replete with a low, rumbling soundtrack, and a “Black Hole,” a velvet-lined room whose aperture seemed to pull in viewers with palpable force.  Elsewhere, in a wall text called “The Divine Atom,” the artist uses the idea of transubstantiation to spin a post-9/11 tale of microbiology-assisted redemption, suggesting that faith and reason might not be as incompatible as we think.
That both systems of thought operate with equal force inside this highly respected artist gives viewers yet another conundrum to ponder.
–DAVID M. ROTH