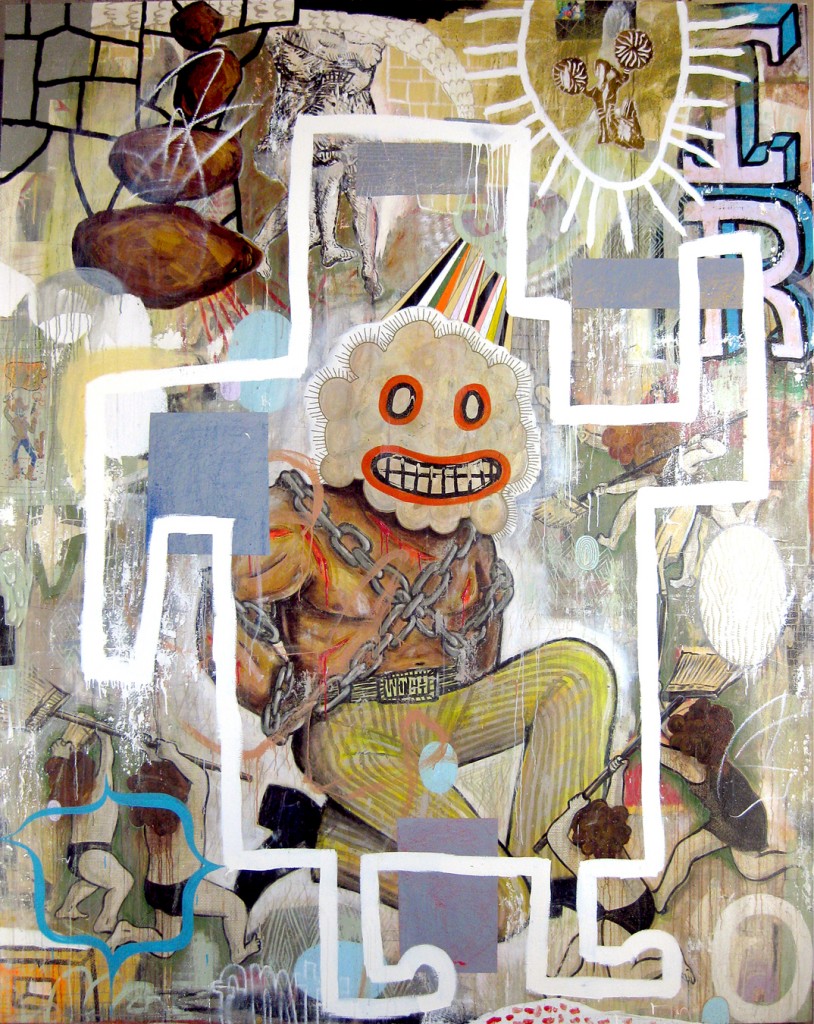 Hip deep in the appropriationist methods that took hold in the 1980s and that continue to fuel low-brow production as it inches toward highbrow respectability, John Yoyogi Fortes stands out for his ability to seamlessly integrate many different styles.  His canvases, which roam from large to monumental, begin with an under girding of marks and color swatches and then build out into quasi-expressionist statements that hint at oblique political and personal conundrums.

In league with current trends in street art, Fortes practices a loose method of icon and symbol deployment that keeps viewers intrigued and suitably off-balance.  His thinly painted characters, pulled from American and Asian comics and from '50s clip art, are united pictorially by brushed, spray-painted and stenciled graphic shapes that when combined, allude to narratives that may or may not exist.  It's a trickster's game, and a good one at that.   To wit: It's easy to be amused by the telepathic "communion" between Superman and Jesus ("Exercise in Mindfulness"); the vaporization of '50s television characters ("Christonite/Unsuspecting Impure Halo"); and the apparent satirization of the Chinese pharmaceutical industry ("Gift/Immaculate Misconception").  Still, for all the fun, Fortes knows how to sling a broadside.  His largest (120 x 96") canvas, "Immaculate Rendition," shows an Asian cartoon character bound in chains whose face appears to be that of Little Black Sambo.  Outlined by a white shape that is equal parts Swastika and human figure, the picture makes a searing and unambiguous statement about American foreign policy. 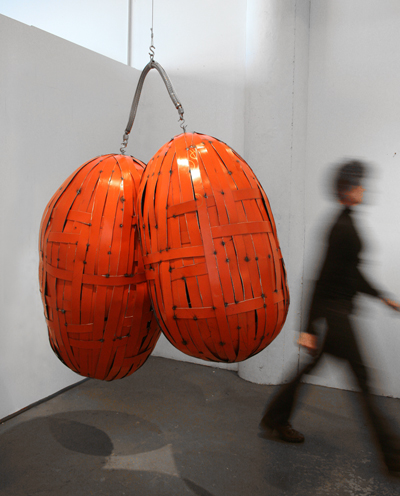 Sculptor Linda Raynsford seems like an odd partner in this context; but she activates the room's considerable space with works that challenge conventional notions of how steel should behave.  I'm thinking in particular of "Connected," a piece derived from metal doors that were cut up and "woven" into forms that dangle like seed pods from the ceiling, and of "Swollen," a similarly crafted pedestal piece that looks like a big, gleaming donut.  "I Left My Wife," a large, floor-mounted stainless steel disk pounded into irregular surface shapes and inscribed with text, also confounds perception: the bottom is flat, like a deflated tire.  In art and life, things are rarely what they seem, and in this show, which is essentially a conjuring act, both artists succeed at upending expectations.