Many artists try to capture the shape and feel of human consciousness; but painter David Wetzl attempts something even more ambitious: the depiction of human existence as a tug-of-war between all of the isms that have ever existed. Never mind the so-called zeitgeist. Wetzl wants to show how every belief system in human history continues to shape our experience.

The result in “Morphing Mind Tiers,” a seven-year survey, is a chaotic cocktail of representation and abstraction rendered in a slew of art historical styles that show reason, faith, genetic memory and biological imperatives colliding in a sea of pop cultural and technological effluvia. The work is complicated and seductive and, at times, overwhelmingly so.
Geometric patterns, bright colors and repeated motifs predominate in nearly all of the 19 works on display. The largest and most ambitious consist of acrylic-on-shaped-wood panels set against blob-shaped “backdrops” painted across large swaths of wall. There are also smaller stand-alone panels, a wall-sized 3-D installation and a quartet of vinyl panels set against a backdrop measuring 30 feet long and 11 feet high. 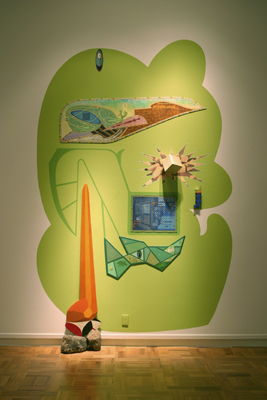 In most of his works, Wetzl uses grids as a general organizing principal to represent networks, both human and digital, as well as landscape. Over these he lays tribal masks, bridges, broadcast towers, figures, color fields, landmark buildings, highways, cities, circuit boards and animals. If you feel a sense of vertigo there’s a good reason: Each panel is the product of hundreds of hours of labor in which multiple layers of imagery have been laid down, sanded and varnished to create a transparent, labyrinthine effect reminiscent of “Brazil,” the Terry Gilliam film that portrayed the world as a bureaucratic maze of endless ductwork.
“Evolution of S.C.I.P.: From Youthful Feline Shaman to TAICOOco. C.E.O.” — a saturated smashup of cubist illusionism and surrealist fantasy — is a leading case in point. Its interlocking cascade of geometric blocks plunges viewers into unfathomably deep pictorial space while challenging the imagination with the visage of a flower-sprouting animal skeleton with nine eyes alongside a cat dressed in geometric shapes and polka dots. It’s a diptych of sorts. The other half contains a fish-eye-lens view of what might be a third world (think: Sao Paulo) apartment block. The fittingly obscure title refers to Wetzl’s alter ego, SCIP, self-invented muse who leads a fictional “wisdom-based” corporation that, according to the artist’s tongue-in-cheek mythology, rescued him from “wallowing in an elevated pool of postmodern pleasantries and slowly succumbing to its nihilistic, narcissistic tendencies.” Indeed, where some postmodernists delight in emptying their art of content, Wetzl piles it on, and he does so with all of the sly, ironic, hermetic references we expect in work of this sort, but without the numbing cynicism of, say, David Salle — an influence that Wetzl keeps on the same short leash as he does other obvious mentors like Lari Pitman, Sigmar Polke, Miro, Klee and Kandinsky.
Wetzl calls himself “a positive cynic” and his work largely supports that assertion.  “After Tiepolo: The Triumph of Virtue and Nobility over Ignorance” is essentially an environmental treatise, signified by the words “Carbon” and “Silicon,” the universal recycling symbol, loads of flora and an agricultural landscape whose aerial perspective is achieved with an overlay of rectangular paint swatches, sanded to create a scrim that looks like cloud cover. It’s a cheery outlook, aided and abetted by technology, represented here by a slender piece of circuitry that ties the pieces of the picture together.
Wetzl’s most ambitious work, the above-referenced four-panel “S.C.I.P. Train Propels Shaman Birth/Maturation beyond White Cube Death,” puts evolution under the painterly equivalent of a microscope. Dominant images include a purple-and-yellow Rorschach spatter representing the “brain scan of a Christian speaking in tongues”; a “postmodern soldier” firing at a white cube representing minimalists (“who wants to reduce everything to purity”) and conceptualists (“who want to reduce everything to ideas”); and a shaman with a cubed-shaped head, open at the top to indicate a receptiveness to ideas that defy reason and logic. All of this appears inside the confines of a painted backdrop in the shape of a train whose exterior edge outlines the map of an imaginary continent into which are cut a truncated crucifix, an airplane wing, the grid of a printed circuit board and a series of udders. The embedded message seems to be that spiritual evolution chugs along as an inevitable force, embracing the positivist ethos while transcending its limitations. 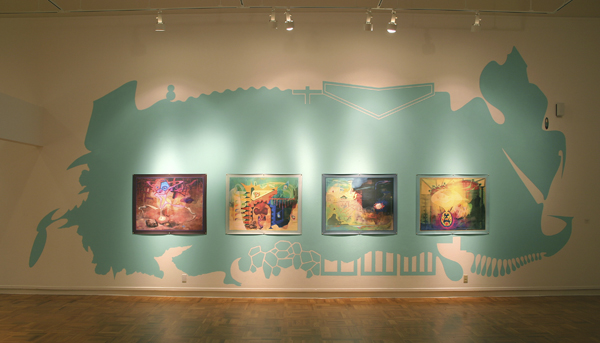 Not all of Wetzl’s work is overtly optimistic; in fact much of it details conflict and competing world views played out in epic battles — psychic, intellectual and bloody-real. A favorite subject is the collision between modernist and postmodern values and what, if anything, comes next. “The Jaded Third Eye Reveals Itself at Pomo Hills C.C.” is typical of the sprawling world views Wetzl packs into a frame. In this one, industry (oil and media), global capitalism (Dubai’s landmark Burj Al-Arab hotel), militarism (fighter jets) and the eclipse of high modernism (a darkened Wayne Thiebaud confectionary painting) are linked by a network of Miro-like eyes.
Wetzl’s hardly the first painter to make sweeping historical and philosophical statements; but he’s certainly among the few to portray the impact of computer technology on the human condition. As far back as the early ‘90s, images of microchips, circuit boards and on-screen computer “windows” figured prominently in his paintings, and in the years since, his vision of a wired world in which humans have the capacity to experience multiple realities in real time has, for better or worse, become an undeniable fact of life. Which for Wetzl is not a bad thing — he sees technology and spirituality as inextricably bound.
What’s refreshing in all of this is that Wetzl doesn’t take himself too seriously. He’ll toss off narrative possibilities in a self-deprecating manner and just as quickly inject other, equally plausible, scenarios. He also speaks at length about the influence of pop philosopher Ken Wilber and even confesses to illustrating Wilber’s color-coded ideas about evolutionary psychology. However, in looking at his work, you never get the sense that he is illustrating theory; the work is too playful, too irreverent and too preoccupied with material innovations to be truly didactic.
Wetzl’s struggle is that of an artist in love with art history, an artist trying to forge a path in an environment in which the simultaneous existence of all possibilities has turned the pursuit of meaning into a Herculean task. It’s the ultimate postmodern conundrum, of course, but Wetzl is determined to create a new synthesis, and if that means making pictures of boggling complexity so be it.
–David M. Roth