From its inception in the early 19th century, photography has been about alchemy. Not just the chemical kind that occurs in darkrooms (or today in Photoshop) but the alchemy of the imagination in which ordinary things are transformed. Roger Vail, whose retina-burning photos of neon signs go on view this month at JayJay, is a master of this sort of thing. Since 1970, the year he joined the art faculty at CSUS, Vail has trained the lens of his 8 x 10 view camera on seemingly ordinary subjects to produce images that range from poetically minimal to flat-out hallucinatory.

His best-known pictures, of carnival rides at night— are blazing wheels of color that look like an artist’s palette run through a spin cycle. “I didn’t know what was going to happen; I just shot it,” Vail says about the earliest of those images, a B&W from 1970. “When I saw the film I just flipped.” That “accident” formed the basis of an oeuvre that would encompass night skies, oil refineries, bridges, marble quarries and rivers. 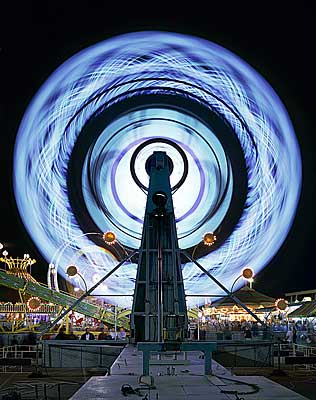 In 2006, Vail scored a hit when Life splashed one his carnival pictures on its cover, accompanied by a seven-image spread inside. Bill Shapiro, the magazine’s formermanaging editor, called the pictures “quintessential American iconography. They’re a thrill ride in every sense of the word. They capture the way you remember those hot August nights at the state fair.”
Vail’s exposures, which range from several minutes to hours, reveal not only the otherworldly aspects of his subjects, but a variety of spooky artifacts – none of which the artist conceives beforehand. “It’s the forms, colors and textures that catch my eye when I’m working,” says Vail. “Content comes later.”
Colin Westerbeck, a former photo curator at the Art Institute of Chicago, likens the “irony and playfulness” of the carnival images to the “out of control” qualities of “a Hitchcock film where it’s dangerous and a little wacky.”
His assessment certainly holds for the neon-sign pictures, Vail’s his first departure from film, produced with a digital camera so that he could electronicazlly combine multiple exposures and capture the full tonal range of high-contrast night scenes. Made primarily in Las Vegas, with notable snaps in LA and Sacramento, the pictures use reflected light to pimp-out a limo in flowing zebra stripes; recast a hotel wall as a pigment-laced river; turn a stack of café chairs into a spinning kinetic sculpture; transform the “Viva Las Vegas” sign into a cosmic gyroscope; and pay homage to early influences: Dan Flavin, the minimalist fluorescent light sculptor and Edward Hopper, whose iconic “Nighthawks” painting Vail salutes in “Open Late, a sumptuous photo of an empty café. 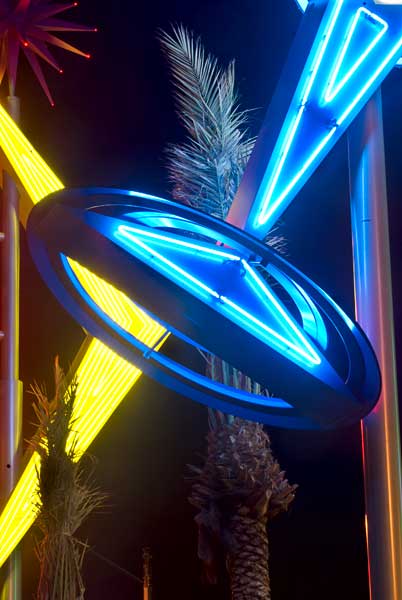 What motivated him to revisit those inflkuences – Flavin in particular – was a display of sign sat the Museum of Neon Art in L.A. After photographing there for “four full days,” he concluded that neon was the only thing other than carnival rides “that would give me a full spetrum of color at night. It became an obvious choice.”
Born and educated in Chicago, Vail, 62, is an intense, compact man who speaks with the same forthright conviction seen in his compositions. He credits the city itself and the Art Institute of Chicago, where he earned his BFA and MFA degrees, with forming his aesthetic sensibility.
In Chicago, Vail spent a lot of time pouring over images by seminal artists like Walker Evans and Robert Frank – two influences championed by the museum’s then-photo curator, Hugh Evans.  Evans became Vail’s mentor and advocate and placed the young photographer’s works in the museum’s collection, paving the way for acquisitions by others, such as the Museum of Modern Art, the San Francisco Museum of Modern Art and the J. Paul Getty Museum.
In 2010, the Pence Gallery in Davis will give Vail a 10-year retrospective in which he will not only show his time-lpase portraits taken at night of carnival rides and neon signs, but perhaps also a new set of portraits. 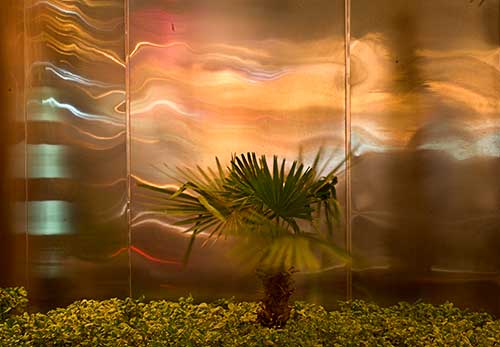 “I’m trying to do to humans what I did to carnival rides,’ Vail says of the work in progress. To underscore that point, Vail reads a quote from sculptor Mark de Survero: “The heart of art is the search for form that is electrifying, that gives life to our vision.”
Vail’s work is like a circus mirror – a shadow world in which reflections and refractions transform solids into liquids and gaseous apparitions. It’s not the dictionary definition of alchemy, but close enough.