From de Tocqueville to Baudrillard, American history is filled with foreigners who have come to these shores to reveal truths that make us squirm.  When painter/satirist Enrique Chagoya burst onto the Bay Area scene in the mid-1980s, his charcoal-and-pastel drawings did exactly that.  Smash-ups of American pop culture and Mesoamerican myth, his art exposed the concealed ideological baggage that culture carries when it crosses national borders.             Practicing what he calls "reverse anthropology," Chagoya, 54, redraws Latin American history to show the conquistadores (represented by American cartoon and comic book heroes) being vanquished by the natives.  In this violent, sardonic oeuvre in which the artist upends the modernist practice of appropriating primitive art, Aztec and Mayan warriors and ancient goddesses clash with the likes of Superman and the Lone Ranger, oftentimes at length across multi-panel codex books that fold out, accordion-style, like the original pre-Columbian history texts that the Spanish destroyed.

To create these highly complex, non-linear narratives, Chagoya operates intuitively.  His studio is filled with books – on ancient and contemporary art, history, religion, politics and comics – as well as masks and objects collected from flea markets.  These he spreads out on a table, selecting combinations that he projects onto paper and then paints or draws, creating from scratch whatever images can’t be gleaned from the material at hand.  His selections, he maintains, aren’t always conscious, but in the end they express a consistent world view.  Namely, that power, regardless of who wields it, perpetuates itself through ideologies that pit competing stereotypes against each other. 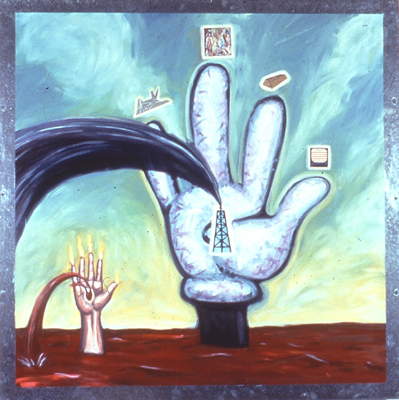 While such methods and concerns put Chagoya squarely inside the identity-obsessed, appropriationist milieu of ’80s and ’90s, his work has always seemed to operate outside the high-low fracas. No doubt, that distinction helped Chagoya catch the eye of Neo Expressionist painter Sue Coe who introduced Chagoya to the San Francisco dealer Paule Anglim who in turn helped orchestrate his 1994 exhibition at the M. H. de Young Memorial Museum in San Francisco – a precursor to the current 25-year survey ("Enrique Chagoya: Borderlandia") mounted in 2007 by the Des Moines Art Center that travels to the Palm Springs Art Museum for three months beginning Sept. 27.  (The show’s three-month run at the U.C. Berkeley Art Museum ended May 18.)             In the intervening decades, Chagoya has had nearly 40 museum shows in which curators have linked him to the great Mexican muralists (Rivera, Siqueiros and Orozco); the 19th century political cartoonist José Guadalupe Posada; the French caricaturist Daumier; and to the Russian Constructivists who believed as Chagoya does "that art should be seen as life."  Indeed, in the art verité mode, Chagoya has redrawn Goya’s "Disasters of War" scene-for-scene with contemporary political and religious figures and recast Philip Guston’s "Poor Richard" cycle with a Pinocchio-nosed George W. Bush standing in for Richard Nixon. 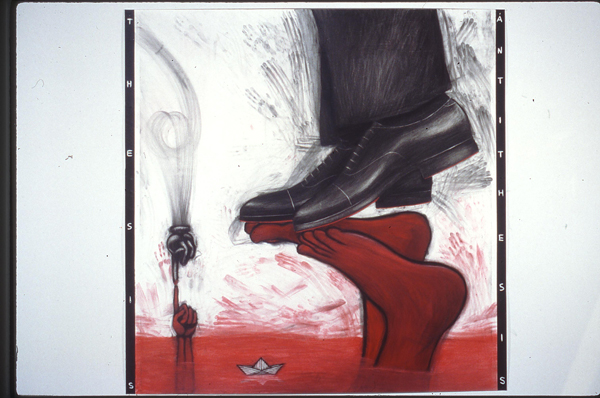 Chagoya’s best-known works – charcoal-and-pastel drawings on paper – are practically iconic in the Bay Area where he has lived and worked since emigrating from his native Mexico City in 1977.  Ronald Reagan and Henry Kissinger as Mouseketeers spreading graffiti from buckets of blood and former Gov. Pete Wilson being consumed by Aztec cannibals were two of his more sensational images.  More recently, he pictured the dramatis personae of the current Bush administration as "Snow White and the Seven Dwarfs" along with the unlikely triumvirate of Bin Laden, Jesus and Gov. Schwarzenegger dressed as ballerinas –  an undisguised swipe at the governor’s "girlie men" crack.              Chagoya draws these large-scale pictures (the biggest are 80" x 80") in red, black and white, fully aware of the color scheme’s agit-prop history, as well as its ancient roots in the legend of Quetzalcoatl who, according to Chagoya, transformed himself into a black ant to learn the origin of corn from a kernel-carrying red ant – a symbolic collision of "opposites that interacted to access truth." Chagoya also makes a frequent practice of creating paintings on canvas collaged with swatches of amate paper – the same fig-leaf bark used by Mesoamerican Indians. 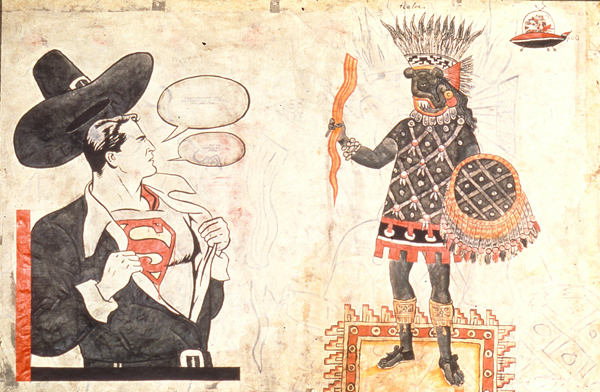 Another of his trademarks is his use of stark differences in scale to represent gross imbalances of power.  In "When Paradise Arrived," the outsized middle finger of Mickey Mouse (inscribed with the words "English Only") flicks an immigrant child like an insect.  Similarly, "Thesis/Antithesis" shows the hard-shoed, power-suited leg of a corporate type pushing the upended bare foot (presumably that of a dispossessed native) into a sea of blood.   In a typical gesture, Chagoya often adds the imprint of his own hand, in smeared down strokes, indicating what can only be interpreted as a collective last grasp.             It’s a sensibility "related to death, which is different than here because in Mexico there’s a cultural influence that comes from before pre-Columbian times in which life is a dream and when you die you wake up," explains Chagoya who lives in San Francisco and teaches art at Stanford.  "It’s a reaction from people to protect themselves against pain."  The aesthetic translation of that ethos is seen in his penchant for dressing evil in the clothes and poses of comic heroes.  "The devil has a beautiful face, just like in the Bible, so I wanted to look for that face.  I never made a portrait of a politician with sharp teeth.  I wanted to make them clowns, and it turned out to be closer to reality."             Goateed, bespectacled and dressed in loose fitting denim with his thinning salt-and-pepper hair pulled straight back, Chagoya looks like a retiring anarchist.  His eyes twinkle when he speaks and he laughs easily, citing art-historical references in a supremely modest manner that betrays none of the anger that underlies his work.             Before moving to the U.S., Chagoya studied economics and contributed political cartoons to newspapers.  He also participated in the student uprisings of the late ’60s and early ’70s that the Mexican government brutally suppressed.  And though he arrived well-educated and politically savvy, he wasn’t prepared for the race-based identity politics that crisscrossed the U.S. art world.  "In Mexico," he explains, "we have conflict, but it’s a conflict based on class, not race.  "Here," he says, speaking of the nationalistic fervor expressed by Bay Area Chicano artists in the ’70s and ’80s, "I felt like I was in a foreign film without subtitles.  Suddenly there’s an ethnic war taking place that I was not aware of."                   Unable to express himself through the prism of race, Chagoya turned to headline news, ancient and modern European art sources and to his own newly bifurcated relationship with American pop culture which, as a youth, he consumed voraciously through translated comic books and TV shows like "Gunsmoke."             Contrary to the evidence in "Borderlandia," which seems to indict U.S. foreign policy unequivocally, Chagoya claims his work is "a mirror on humanity" rather than an exercise in finger pointing.  "There is," he maintains, a measure of "good and evil within every culture" that is accompanied by stereotypes that are designed to propagate ideology.  "All of these stereotypes are created to justify dominance, and that’s what I’m dealing with in my work.  Culture," he asserts, "becomes an imperialistic force, a colonialist force that replaces somebody else’s culture. "If you’d been conquered by the Aztecs," the artist points out, "we’d have pyramids instead of churches."

Enrique Chagoya’s 25-year survey, "Enrique Chagoya: Borderlandia," is at the Palm Springs Art Museum from Sept. 27 to Dec. 28, 2008.  He is represented by Gallery Paule Anglim in San Francisco and the George Adams Gallery in New York.