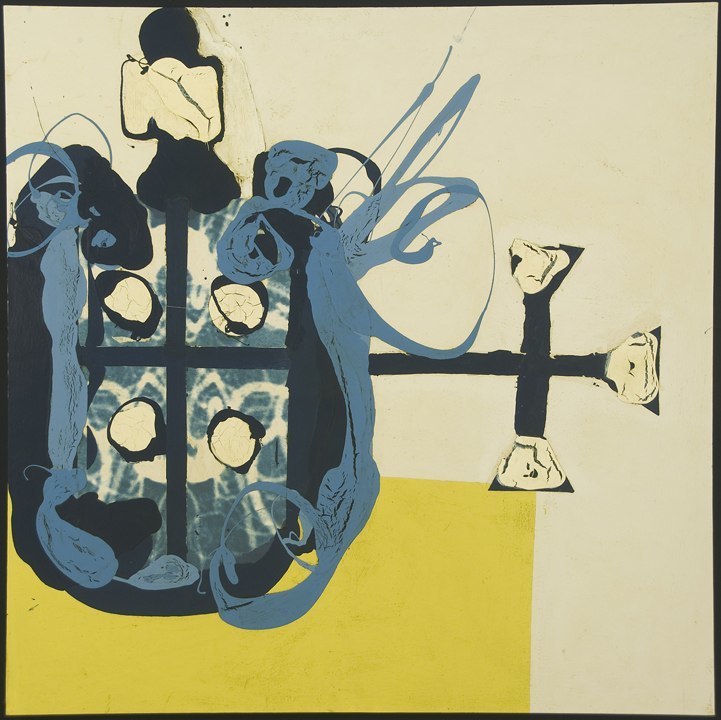 Much has been written about Katherine Sherwood’s recovery from a cerebral hemorrhage that debilitated the left side of her brain and paralyzed the right half of her body.  The event, which occurred in 1997, forced her to not only relearn language and basic motor skills, but also to paint with her left hand.  While the story of her rehabilitation feeds our thirst for heroic reinvention and fuels the myth of disability as a door to enhanced perception and self knowledge, it also seems to have also obscured what makes Sherwood’s art so compelling.

In this compact show of eight large and small-scale works from 2006 to 2008, Sherwood, in what amounts to a visual roman á clef, demonstrated why she is one of the most important painters working today.

At first glance, she appears to be tilling the now-familiar soil of biomorphic abstraction, but her forms are so uniquely stylized that they can’t really be compared to any of the biologically based formulations we’ve seen in this genre.  Her work is sui generis.  One reason is that every painted line in Sherwood’s work is derived from a 17th century text containing images known as Solomon Seals – symbols that the biblical king devised to summon spirits and extract wisdom.  In Sherwood’s hands, these forms appear not as stamps, insignia or crests, but as highly controlled paint pours.  They puddle and crack and then taper off into thin, loopy lines that recall both Franz Kline’s architectonic geometries and Pollock’s late-period flirtation with figure-like forms; which is to say, they rivet the eye in a way that makes them elegantly iconic.

She also photo transfers to almost every canvas angiograms of her own brain, which contrary to what you might expect, look like the veins of aquatic plants or exotic trees.  She also transfers more easily recognizable images of the cerebral cortex from 16th century medical texts. Typically, Sherwood also includes strong horizontal lines painted atop interlocking geometric blocks.  Combined, these elements ignite a visual dynamic that blurs the distinction between representation and abstraction, since much of what appears to be abstract in her pictures is really photo documentation of scientific fact.  As is her trademark, plastic activity, rendered in what she calls “ugly colors,” takes place off-center, against mostly neutral grounds – either crème-colored, pale yellow, ochre or pea-green.

The most powerful example of these oppositional forces shows up in “Firmer Spirit,” a 42 x 36″ print in which paint poured in the shape of a loosely caricatured face, floats atop a cyan-hued tangle of brain matter framed by two orange geometric boxes.  This visage appears to be staring at an unseen point beyond the picture like a leering mask, mocking the hubris of an artist (or a viewer) who thinks she can one up nature by creating abstract shapes that are more compelling than the microscopic forms that reside inside her own skull.  I doubt that Sherwood entertained this thought, but the picture certainly lends itself to such interpretations.

On the other hand, by coupling digital representations of the body with man-made symbols of magical conjuring that have been manipulated beyond recognition, Sherwood is keenly aware of the common ground shared by art and science in their quest to explain the human spirit.  The results, as seen in the pictures on view here, feel a lot like puzzles: they challenge you to consider (and confront) the very nature of consciousness and, by extension, the abyss of mortality.

“Transports Instantaneously,” a 72″ x 72″ canvas, uses the shape of a cross as a portal through which you view images of the artist’s angiograms overlaid by biomorphic blobs that look like crossections of brain matter.  These appear in quadrants of a window framed by lava-like flows of navy-blue paint that open out onto looping ovoid gestures.  “Cajal’s Revenge,” a 64″ x 50″ painting named for an early 20th century brain researcher, unfolds with a similar dynamic. It juxtaposes the tree-like shape of an angiogram in the top left corner with an accretion of multicolored, cracked paint spills that fill the picture’s bottom half and resemble an exposed archeological dig seen from the air.  Thin lines connecting the two halves suggest the fragile link between body and brain.

In only one work in this exhibition, “Hush, Hush,” a 38″ x 30″ print, does Sherwood depict one of the seals realistically.  It’s a circular shape whose interior forms recall the medieval motifs that show up frequently these days in P&D.  And while it’s instructive and interesting to see Sherwood’s source material unfiltered, the image, even while offset by other, more lyrical shapes, makes the picture feel diminished in comparison to her richly hued, highly textured canvases.

If a recent (2008) painting, “Body Bingo,” is any indication of a trend, Sherwood may be starting to express herself more economically.  This 48″ x 60″ canvas is dominated by two dark puddles of paint that sit at the bottom center.  Running up the left side are three horizontal bands topped by another of those orange boxes.  Higher up, Sherwood superimposes a calligraphic shape over a bingo board and a small swatch of an angiogram, which here looks like an x-ray printed as a cyanotype.  The painting, like so many in Sherwood’s oeuvre, is an enigma – one you can’t stop looking at.

Part of what makes her work so alluring is the sheer number of styles that coalesce: gestural and geometric abstraction, photography, minimalism and color field painting.  Sherwood maintains she hasn’t studied or employed these styles in a conscious manner, but instead arrived at pictorial conclusions through a laborious trial-and-error process.  In the end, there’s a fierce compositional logic at work in these paintings, and it exerts an almost vertiginous pull, bringing viewers face to face with Sherwood’s obsession with the brain’s mysteries.

Her paintings and prints don’t do much to explain those mysteries; Sherwood isn’t much interested in illustrating medical science, only in amplifying the mysteries and casting them in sharper relief.