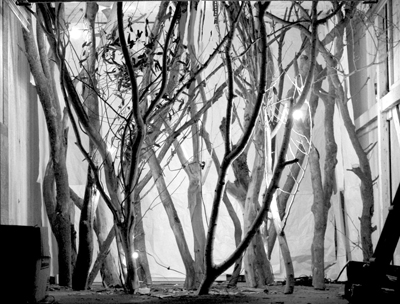 Conceptual artist Chris Dauber has spent a good deal of time exploring how thought and feeling can be manipulated by out-of-context sensory information, and how, when such manipulations occur, reason flies out the window.

A memorable case in point was “Travelers Amid Mountains and Streams,” a 2005 installation in which Dauber darkened the top floor of Sacramento warehouse and permitted visitors to wander about in a room the size of a footfall field in almost total blackness.  The only spatial clues came from a horizontal band of illuminated boxes encircling the perimeter that delivered snippets of text that when pieced together by viewers suggested a story in which a narrator flees an unspecified natural disaster. Apart from igniting all sorts of post-Katrina, post-911 anxieties and thoroughly disorienting everyone, the installation may have marked the first time an artist – anywhere – had used a man-made environment to draw attention to a text.  The exhibit immediately migrated into the realm of legend where it has grown in stature ever since.

In “The Hidden,” Dauber’s latest installation at the Pence Gallery, he again plays havoc with our sense of equilibrium, this time by injecting urban sounds (á la Cage) into a rural setting of his own making.  Viewers enter a dimly lit room to encounter a several tons of bare eucalyptus trees that have been lashed together to evoke an environment that recalls the slough side thickets of the Sacramento delta, replete with broken fence posts and sun-bleached animal bones.  Snaking through it all like a roller coaster is a metal box that looks like a twisted rain gutter.  Embedded in it are tiny speaker cones that emit, at irregular intervals, a host of recorded sounds: air brakes, trolley bells, whistles, grinding gears, animal grunts, footfalls and clanging metallic dins.  These noises leap out at random places and in varying volumes, and it’s not long before a gnawing sense of unease takes hold.  Sounds appear and disappear, then reappear in different places.  Are they the same or different?  It’s impossible to tell.  Soon, our spatial reckoning system falters, and what began as walk in the woods ends up feeling like Poe’s “Tell-Tale Heart.”

You might easily think these sounds are computer-generated, but they’re not.  Hidden from view, an electric motor spins a belt-driven plywood platter containing electrical contacts that, when activated, distribute the contents of an iPod to the network of speakers stationed around the room.  Also contrary to what you might think, sounds don’t just grow fainter with distance; they actually are perceived differently, according to Gabrielle Carlson, the audio wiz who helped Dauber wire the contraption.  And it’s those subtle differences that disarm us.

As a student of perception, Dauber has long been fascinated by synesthesia, the phenomena of information taken in by one sense migrating to another, as in, say, the ability to taste color.  “The Hidden” doesn’t do this literally, but it comes close.  Inside its gothic landscape of shifting sound,” physiology” as Dauber likes to say, “is overcome by psychology” when visual deprivation and aural dislocation combine to induce visions of things we don’t see but can’t stop ourselves from imagining.

On another level, “The Hidden” may also be an elaborate metaphor for exactly what’s happening in Dauber’s immediate vicinity.  In the Central Valley, especially along the less traveled byways of the delta, farming communities that have remained unchanged for decades are now undergoing a major transformation.  Where crop dusters and tractors were once the only things disturbing the peace, we now hear jackhammers, drills, bulldozers and backhoes and see, with a growing sense of dread, condominiums sprouting in a flatland version of Lake Tahoe.  I don’t know if Dauber meant “The Hidden” as a comment on suburbia’s displacement of agriculture, but if you live nearby it’s hard not to think so.

Topicality aside, Dauber’s chief concern is how the human sensory apparatus orders and interprets the environment.  His skill, as “The Hidden” makes clear, rests on his ability to make you experience what happens when that dynamic goes awry.  The strange beauty of this installation is that you never feel manipulated even when you realize after the fact that you have been.  Dauber parcels out just enough information to make you think you are reaching your own conclusions when in fact it’s your body that’s doing the all thinking.